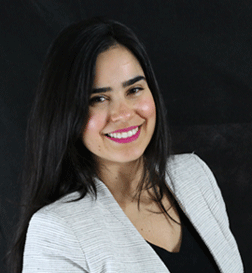 Mrs. Patricia Davis earned her bachelor’s degree in Recife, Brazil in 2006, and then completed her Master of Arts in Teaching at the University of South Carolina in 2011. She taught Spanish and Portuguese at Lexington High School in South Carolina from 2011 to 2015 at the novice and advanced level. In 2012 she started the Portuguese program at the High School and led a Portuguese Club to promote appreciation for Brazilian culture. Throughout her career at the secondary level she completed various translations, staff developments and led the Outreach committee.

While teaching full time at the High School, she taught a Portuguese immersion program in the summer and a Portuguese class for business students at the University of South Carolina.  In the summer of 2015, she began her formal career at the University of South Carolina by teaching Portuguese to students in the IMBA program. Patricia Davis has taught different levels of Spanish and Portuguese classes at USC, including Port 299 (Accelerated Portuguese for Speakers of Spanish). She was the Director of the Portuguese Program from 2019 to 2022 and she is currently the advisor for the Portuguese Club.