Our alumni are an active group, using the skills they learned at SVAD in a variety of ways. We love to hear from our graduates, so please keep in touch!

Please send us an update and let us know how you're doing.

Marisa Bank (2016 Media Arts grad) has been working at Turner Studios, a division of Turner Broadcasting. She started as an Executive Administrative Assistant, supporting 4 VP level executives then moved on to become the Production Coordinator for Turner Studios' sports properties, helping to coordinate crew and studio schedules for NBA TV, NBA on TNT, ELEAGUE on TBS, and NCAA March Madness.

Alexa Garfinkle, graduated in 2015 with a major in Media Arts/minor in Business, worked on Homeland Seasons 2 & 3, Ashby The Movie, both as an office PA, Outcast Season 1 as the Director/Executive Producer's assistant, most recent Shots Fired (which is currently on Fox https://www.fox.com/shots-fired/) as the Line Producer's assistant. Alexa is currently working for Showtime in New York in Rights and Clearances. Her department, Creative Services, creates the broadcast and print promos i.e. trailers, launches, teases, BTS pieces (called Special Features), posters, etc. meaning all in-house marketing for Fox.

Clayton Tilley, class of 2012, was PA for National Geographic on the reality show "Doomsday Castle" and also worked on Fox's "The X-Factor." He also was an AD last summer on an indie  feature called "Misguided Trust." Clayton was Art Director for Lingo Films (a subsidiary of  Skyline films) on their music video for "American Idol" contestant Dylan Arms. After working  as Prop Master for the short film "First Do No Harm," which is about an elementary  school shooting, Clayton was hired onto his present job-- a National Geographic show, Wicked Tuna spinoff, being shot in the Outer Banks of North Carolina.

Austin Grebenc, class of 2007, came back for his master's in Media Arts and graduated in 2010. A few month's prior to graduating, he started a production company called Dust of the Ground with a fellow Media Arts undergraduate, Jeremy Lethco. Dust of the Ground is now three full  time employees and has produced hundreds of videos and filmed all over the country and throughout Europe.

Blake Garris, class of 2011, is currently the Manager of Video & Content Production for Marvel Entertainment in New York. Previously he was a Producer/Director with the PBS affiliate  SCETV while freelancing in various capacities for film and television productions.

Manga artist (from the Japanese-comics class here) Louise Wang, class of 2011, has been hired  as a permanent employee and animator at Next Media Animation, one of the biggest  animation companies in Taiwan and Hong Kong.   Previously Louise was selected for and took  the internship set up between Kodansha USA, the manga division of Random House Publishing  in NYC and Media Arts.

Alex Anderson, class of 2013, is now working full-time as an assistant and project manager for an educational kid’s television show called “Raggs”. She is also working on a SCAD affiliated short film, "At Ease". Previously she worked on the CBS show “Reckless”, a feature film “Max”, and freelanced for WACH Fox. She’s also signed with talent agency JTA in Charlotte, NC.

Gregory Goetz, class of 2011, started in LA as a tour guide at Warner Bros. Studios before working as a Writers Office PA on the Fox network drama "Gang Related", where he was promoted to Script Coordinator. From there he worked on WGN America's "Salem", ABC's "The Whispers", HBO's "True Detective", FX's "Tyrant", and ABC/ShondaLand's "The Catch", where he co-wrote an episode for season one (air date: 5/12/16). He credits Professors Northrop Davis and Faye Riley for his start and first break in the industry.

Candace Miller Cannon, Lexington High School art teacher and MAT in Art Education graduate, has a student who recently won a National Medal from Scholastic Art. Candace will be going to NYC with her student to attend the ceremony.

Thomas Bishop was accepted to a PhD program in Education at Stanford University. 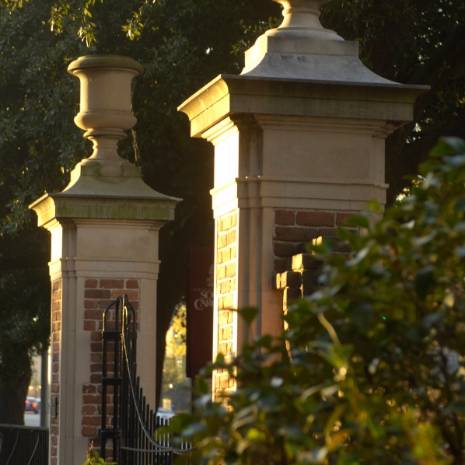 Online giving is easy! You can specify where you'd like your gift to go online or by calling Vinnie Suarez, our Senior Director of Development (803-777-4232).