PARTICIPANTS: The contest is open to South Carolina high school juniors and seniors in public, private, and home schools.

TOPIC: The topic is “How should we improve the state of South Carolina?” We welcome submissions in all creative genres, including fiction, drama, and poetry. We also welcome straightforward essays and other kinds of writings – diary entries and letters, for example. Submissions must be within 750 words.

DEADLINE: Students must be residents of South Carolina. The deadline is September 25, 2020.

Cash prizes of $1,000, $500, and $250 will be awarded to the first, second, and third place winners. The entries of finalists and winners will be showcased by the South Carolina Honors College on its website.

No. We accept poetry, fiction, drama, short stories, and combinations of those genres. Some students have chosen to submit entries written as letters and diary entries. But essays are acceptable as well.

Submissions will be judged for their originality, creativity, and writing style. We encourage creativity, but not at the expense of clarity. It’s important to respond to our prompt in a way judges can understand.

We hope to have results about which students are finalists by mid-November. We will let each of you know personally, by email, whether or not your work was chosen.

No. The money is yours to do with as you wish.

Yes. You do not have to be college-bound at all.

No. While we recognize the value of spoken word literature, the contest is based on writing skills. Perhaps your spoken word work can be written.

Yes.  Otherwise we have no idea if the writer is making up facts. Rather than using footnotes, we suggest a more reader-friendly method, i.e., South Carolina has more rabid wild animals prowling its neighborhoods—44 percent more—than any other state, according to a 2014 report from the U.S. Rabid Wild Animal Department.

It is okay for your teacher to proofread your work, but you should indicate following your submission that you received the help. This is a writing contest, not an editing or grammar contest. We are interested in hearing your voice and your response to the prompt. You can simply write: “I want to thank Ms. Laura Ingalls Wilder, my English teacher, for proofreading my final draft.” Or, “I want to thank Mr. Atticus Finch, my government teacher, for encouraging me to revise the ending.” If your submitted work is entirely your own production, you may indicate that at the end: “I received no proofreading or editing assistance. This submission is entirely my own work.”

Jonathan Haupt is the executive director of the nonprofit Pat Conroy Literary Center and the former director of the University of South Carolina Press, where he created the Story River Books fiction imprint with Pat Conroy, named by Garden & Gun magazine as one of "the top ten things to love about the South." Jonathan’s book reviews and author interviews have appeared in the Charleston Post and Courier, Beaufort Lowcountry Weekly, Beaufort Lifestyle magazine, Savannah Morning News’ Beacon magazine, Pink magazine, and Southern Writers Magazine’s Suite T blog. He is co-editor with Nicole Seitz of the anthology Our Prince of Scribes: Writers Remember Pat Conroy, the recipient of a dozen book awards. Jonathan also serves on the boards of the South Carolina Academy of Authors and the Friends of South Carolina Libraries and on the advisory board of the South Carolina Humanities and the affiliates committee of the American Writers Museum. Under Jonathan’s leadership, the Conroy Center has been honored as South Carolina’s first affiliate of the American Writers Museum, second American Library Association Literary Landmark, and winner of Beaufort’s 2019 Civitas Award for Tourism Leadership. Earlier this year, Jonathan was recognized with the Doug Marlette Literacy Leadership Award presented by the Pulpwood Queens, the largest book club in the U.S. He lives in Beaufort with his wife and their pack of rescue pets.

We prefer Word documents and have no preference about fonts, though one that is easy to read is helpful.

No. The form you complete online will serve as your cover page. It’s nice, but not necessary, to have your byline at the top of your submission.

Sept. 25All applicants must be residents of South Carolina. The deadline for submissions is Friday, September 25. For questions, contact us. 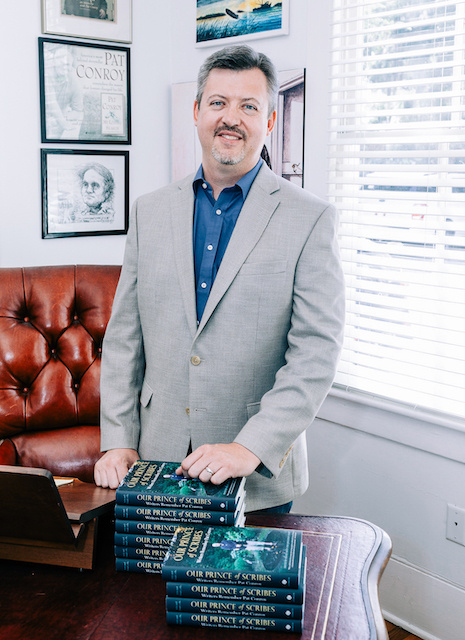 This year's finalists will have their work reviewed by the 2020 writing contest judge, Jonathan Haupt. Jonathan serves as executive director of the Pat Conroy Literary Center and is the former director of the University of South Carolina Press. 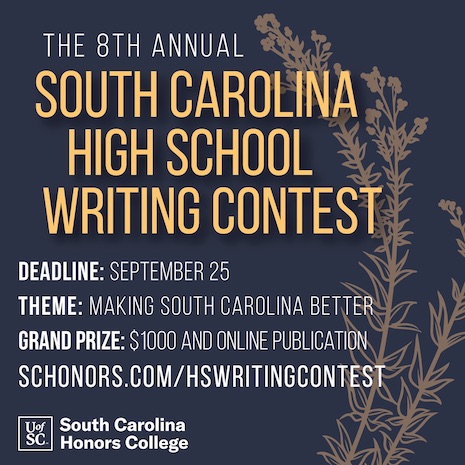 Looking for social media graphics to share the contest with students? 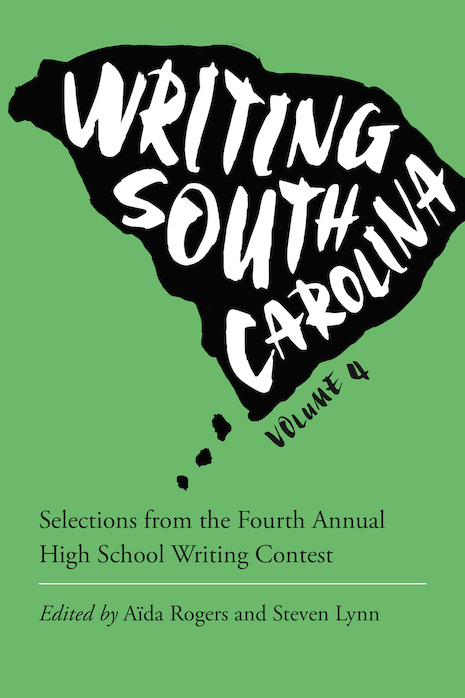 To see how previous finalists responded to our prompt, pick up a copy of volume four of Writing South Carolina: Selections from the High School Writing Contest.