As a Gamecock, my vision has No Limits 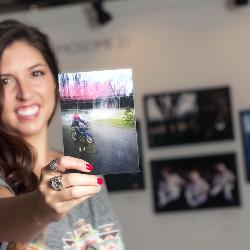 The photographs taken by Taylor Singmaster, aren't perfect, but the focus is clear. The images serve as metaphors for the lives of children with Down syndrome, whose worlds aren't perfect.

Distorted images. Uneven exposures. Blurred edges. The photographs taken by University of South Carolina grad Taylor Singmaster are not perfect, but that's on purpose. Ever since she started babysitting Jack, she knew she wanted to share her insights into the world of children with Down syndrome through her photography.

"Meeting Jack was a life-altering experience," says Singmaster. She served as a nanny for his family for three summers, plus sitting whenever she could the rest of the year.

Singmaster saw the struggles and joys families experience when a child has Down syndrome. As a photography student, she was already interested in social documentary photography. Singmaster realized this was the perfect topic for her senior thesis. She reached out to other families so she could feature more children.

She also reached out to some of her Carolina professors for guidance along the way. "Kathleen Robbins, in particular, has really helped me out," she explains. Robbins even introduced her to other artists to communicate with. But there was still a lot of work to do.

"It was really hard at the beginning," she admits. "I started with a digital camera, and the photographs looked like cute pictures of kids. They weren't conveying anything." Singmaster had to address why her photos lacked the kind of depth she was aiming for.

"So I started using a Holga, which is literally just a plastic camera for children," she explains. "I wanted that nostalgic feel that was missing in the other photos. And the first thing I noticed was that these pictures are all messed up. They look crazy, but I love that."

As she looked at the images, she realized, "This is metaphor. This is Down syndrome. It's not quite right, but there's something beautiful about it. When you have a baby, you have limited control. And with the Holga, you can only control so much."

Singmaster named her thesis "Chromosome 21," after the chromosome that determines whether a child has Down syndrome, among other developmental disorders. The project was well received and was even displayed off campus. It also helped her get into graduate school.

Singmaster is attending the highly selective Art Institute of Boston, a part of Leslie University. She's pursuing social documentary photography as a Master of Fine Arts student, thanks in no small part to her experience at Carolina. Using a plastic toy camera, Singmaster captures the lives of children with Down syndrome on film so she can share them with the world. While the images may not be sharp, Taylor's focus is clear.