Bringing a 'one Carolina' spirit to campus 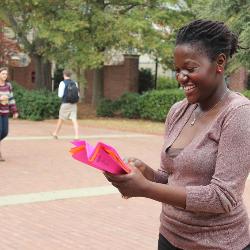 When Binda Niati first came to America from Africa, she lived in a diverse world of cultures with friends from all over the globe.

“I grew up in a such a diverse town. Of all my friends, I maybe had only one American friend. That was my informal introduction into intercultural awareness or communication just by interacting with friends and family who were from various countries and different cultures,” says Niati, a student adviser in the International Student Services office.

Intercultural training gives students, faculty and staff on campus a chance to learn about cultural biases and how to interact with others from different backgrounds. The discussion-based classes help Carolinians understand how to work in a multicultural environment.

“We’re trying to spotlight internationalization on campus, because our world is getting smaller,” she says. “We’re becoming more interconnected each year and it’s happening in our backyard. Chances are even a regular Carolina student is going to one day come into contact with someone who is from a completely different culture.”

The training program hopes to curb that isolation and get more American students, faculty and staff interacting with USC’s global community.

“The benefit is breakdown those walls, the ‘othering.’ It’s bringing back that human notion and not focusing on their differences but their similarities,” Niati says.

The university as a whole is more focused on international issues, she says, pointing to the yearlong celebration of India called CarolIndia. Carolina also takes part in International Education Week, which was created by the U.S. departments of education and state. This year’s celebration is scheduled for Nov. 11-15.

In the end, the cultural training is meant to make USC a more tolerant, accepting community, she says.

“We all have to live in the world, and we have to learn how to live with one another. The end goal is to have an open community and bring cohesion or a ‘one Carolina’ spirit to campus,” Niati says. “It’s about empowering not only international students but American students as well.”

This week, Gamecocks can experience cultures from across the globe around campus at events throughout the week.

Intercultural training sessions are scheduled throughout the semester, and International Student Services is open to working with groups or organizations across campus to set up trainings as well.