Recycling water by the millions of gallons 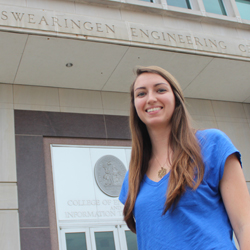 Senior Blake Henard's summer internship at N.C. State could be a model for sustainable efforts on university campuses everywhere.

USC student Blake Henard designed a water reclamation system for the North Carolina State University facilities system that will save about 5 million gallons of water and $30,000 a year.

Not bad for a summer internship.

Henard, a senior majoring in mechanical engineering, is a Raleigh, N.C., native who was happy to find an internship close to home in the summer of 2013. She worked with Erik Hall, the plant engineer for N.C. State, and Bill Ferrell, the assistant plant engineer, over the course of the summer.

“I started with smaller projects at first, so they could gauge how well I worked and discover my interests,” she says. “They wanted me to help them and they would help me gain experience.”

Her final task was to examine the idea of recirculating cooling water for the boiler feed pumps at the Cates Central Utility Plant, rather than sending it down the drain at the end.

“They didn’t think the project would be as big as it was, but when I did the background research and testing, I showed that they could save up to 5 million gallons a year,” Henard says. “The water runoff doesn’t really look like that much, so the results were surprising.

Because the water for the boiler feed pumps was purchased from the city of Raleigh, reducing water intake should save the university about $30,000 yearly.

Henard worked with Hall and Ferrell to design a system of gauges, meters and valves to capture the water at the end of the cycle and pipe it back to the beginning. The closed system was completed and installed the day before Henard’s internship ended.

“Blake was an excellent intern project engineer,” says Hall. “She has the right attitude, motivation and aptitude to not only understand complex operations, but also make a positive impact in a relatively short period.”

Henard thinks the success could likely be replicated at other universities.

“I never knew the behind-the-scenes element of how to send steam and electricity throughout campus,” she says. “But if a system is anything like the one at N.C. State, I’m sure you could do the same thing."

“My view is that introducing students to this type of sustainable thinking and then allowing them to design the solution can have an exponential ripple effect on our campuses, communities, states and beyond,” he says.