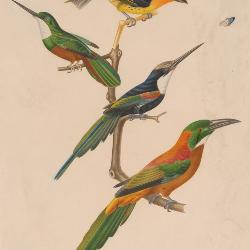 You have an engraving and you know the artist and that it’s from the 19th century. Your job is to describe what is in the picture, when and where it was published and log it all into an international database.

Now do that 14,999 more times and you have an idea of the task facing cataloguing librarian Kathleen McCallister and her assistants working on the W. Graham Arader III Collection of natural history watercolors, woodcuts, engravings lithographs and maps.

“You’re given an item and you’ve got to put all that information in a catalogue so other people can understand it,” McCallister said. “It’s a great job for people who like putting things in order.”

McCallister, earned her bachelor’s degree in English from the College of Charleston. She chose her career after reading what librarians had to say in an online forum.

“I thought it sounded interesting,” she said. “I was always one of those kids with her nose stuck in a book.”

McCallister earned her master of library science at USC and began working with University Libraries as a graduate student. It is a path followed by her assistants, Kelsey Crump, Robert Smith and Emily Boney who all have master’s degrees in library science from USC.

Crump, who also has a bachelor’s degree in art history from USC, uses her art background to work on the natural history prints in the Arader collection.

“I really love the research behind the print: Finding a plant’s original name, what it’s called now; determining whether the animals are accurately drawn,” she said. “If a researcher is looking for something about a flower, they can find it with my description.”

Smith, who also has undergraduate degrees in history and English from USC, is an art and book collector. He also loves maps, which is good because he spends his days looking at hand-drawn and colored maps from around the world. His favorite come from the Blaeu Atlas, published in the 1600s by Dutch engravers.

“With a drawing of an animal, it is what it is,” Smith said. “Maps are subjective, so the art is in the interpretation.”

Boney is also working with Smith on the maps.

“When you get one without a title page, you have to do a little investigating,” she said. “You start with who the mapmaker was and see if you can find a year.”

The team has catalogued nearly 2,000 items. When their work is done, the collection will be made available to faculty members to include in classes.

Follow the process of cataloging the W. Graham Arader III Collection through the librarians' online journal and find out how you can help support USC's Libraries and Collections through Carolina's Promise.

This story originally appeared in the print USC Times, a publication for university faculty and staff. The full issue is available online.