Brain imaging: Looking under the hood 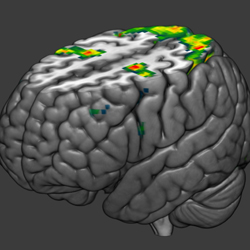 When Chris Rorden started his career as an experimental psychologist, one of the current workhorse instruments for studying the human brain was just beginning to be adopted in the field. Magnetic resonance image (MRI) scanners were still rare, and the process of generating useful data with them was intellectually, and even physically, taxing.

“My first faculty position was at the University of Nottingham and Sir Peter Mansfield got a Nobel Prize (2003) for his work in MRI while I was there,” says Rorden. “If you wanted to adjust the scanner to do different types of scans, you literally would take a wrench out and have to move cables. Now we just click a button and it does it for us.”

Cumbersome as it was at the time, the experience of learning to fine-tune the instrument in its early days was a valuable education. “I spent a lot of time talking to MRI physicists to get useful data on those early devices, so I tend to have good insight into what goes on underneath the hood,” Rorden says.

That’s one thing that MRI imaging can do: let doctors know what’s going on under a patient’s hood in real time. USC and Palmetto Richland Hospital have teamed up to put one of the most powerful MRI machines available in the McCausland Center for Brain Imaging. Rorden is co-director of the university facility at the hospital.

The human brain is a very delicate thing. What we’re finding is that the brain is very sensitive to shock-wave patterns, and traumatic brain injury has become one of the signatures of our recent wars.

Rorden works closely with clinicians to study stroke victims. Using functional MRI (fMRI), he pinpoints areas of the brain that are associated with behavioral problems resulting from stroke. Patients are awake as blood flow to and from different regions of the brain is mapped. The patients can listen to commands, respond verbally and watch a video monitor.

By following changes in the patients’ brain functions in the months after a stroke, the team can develop new therapies.

“There’s a group of research scientists and clinicians here at the University of South Carolina looking at the chronic effects of a stroke, six months to a year later,” says Rorden. “In this area, we’re definitely world leaders.

Rorden also is considered an expert in developing MRI data in many other research fields as well.

“He has publications in his specific area of research, but he also makes contributions all over the fMRI field,” says Scott Vedemia, the coordinating manager for the McCausland Center for Brain Imaging. “He brings to the table something that maybe five other people in the world can, which is why he’s so valuable to everybody who works with him.”

Rorden has coordinated visiting lecturers on traumatic brain injury – including sports-related concussions and military head wounds – in addition to teaching a class on the subject.

With the support of the College of Arts and Sciences, the McCausland Center for Brain Imaging at the University of South Carolina is hosting an open seminar series and inviting some of the leading clinicians and research scientists who work with traumatic brain injury. See our calendar of lectures.