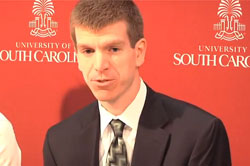 Where is the economy going? Do I need to prepare my business for growth or hunker down for a contraction? Will I be able to find the workers I need?

For the past 33 years, research economists at the University of South Carolina have answered questions such as these for the state’s business leaders. The questions tend to be more urgent during times of economic uncertainty such as the recent recession.

But, it’s always good to take a step back, look at the data and figure out what is going on with the economy, says USC economist Doug Woodward, who has been presenting at the university’s Economic Outlook Conference since 1987, following a 22 percent drop in the Dow Jones Industrial Average – still the biggest percentage decline in the average in a single day of trading.

“Just as there was a lot of uncertainty about the economy then, it’s continued to be the case,” Woodward says. “I think it behooves us as academics, as economists, to talk to the public about this.”

Woodward credits former business school dean James Kane (1967-93) with having the foresight to create the conference.

“It was Dean Kane back in 1980 who had the vision, who thought we needed to reach out to the community and get our economists out there and provide useful information to them,” Woodward says.

The Moore School produces an economic forecast each year and presents it at the conference. The school also brings in business leaders with expertise in certain areas to discuss big issues facing the state and its economy.

At this year’s conference, the business panel discussion focused on higher education and creating a workforce that will be ready to fill jobs over the next 20 years.

“With the panel I participated in, we spent a great deal of time talking about the connection between education and business,” says Pam Lackey, president of AT&T South Carolina Operations and a board member of the Moore School’s Business Partnership Foundation. “Years ago, those might have been seen as separate economic sectors. But today, I believe we all realize the importance of that connection.

“I am convinced there is no greater investment that the business community can make in its future than an investment in the education of today’s children, who are tomorrow’s employees and customers.”

This year’s conference had more than 200 attendees from a wide range of businesses and industries across South Carolina and the region. That is more than twice the conference’s size when it started.

“We’re seeing more people from the private sector participating in the conference,” Woodward says. “It makes us sharper to hear from the public what their concerns are. We learn as well by having that kind of engagement with the community.”

That sort of feedback and responsiveness is important to the future of the conference, Lackey says.

“We have broadened the vision of what an economic outlook is all about and the different factors that play into that,” Lackey says. “I would not be at all surprised if, in coming years, we see more of an international outlook, taking a look at forecasts for nations that are tied even closer with South Carolina than we see today.”