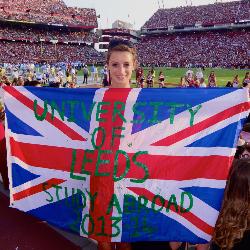 At home at Carolina

International student Eveie Robinson is making the most of her year at USC by traveling, studying and joining various clubs.

When Eveie Robinson first found out she would be attending the University of South Carolina, she searched the Internet to find out where it was. As a university student in England, she wasn't really sure where her U.S. study abroad school was located.

Now, the university and the state have become a second home for the third-year history and English student from the University of Leeds.

“The job market is so competitive in the U.K. There’s a lot of pressure to differentiate yourself from others so I thought studying abroad was one way I could do that,” she says.

So far, she has made the most of her time here by joining clubs and becoming involved across campus. Along with a group of international students, she joined an intramural beach volleyball team through Campus Recreation.

She joined the staffs of student media’s The Daily Gamecock and Garnet & Black to stay involved with journalism, the focus of her studies in the U.K.

“I’ve always liked to get involved. There’s a constant pressure to do something you can put on your CV. But there’s also the social side of it,” she says. “It’s a great way to make friends. It’s important to have a break from the academic side of things.”

Robinson credits USC’s Study Abroad Office and International Student Services with ensuring that she feels at home at Carolina.

“There are so many events, we never feel out of it,” she says.

Robinson also is seeing as much of America as she can. For fall break, she took a trip with Outdoor Recreation to go rock climbing in Alabama. When her mother visited from England, they traveled to New York City. And she’s seeing a bit of the Palmetto State as well, going home with her roommates for Thanksgiving. She also signed up for history classes on the American South and American women.

“I’m not one for just being plunked somewhere and not knowing the history behind it,” Robinson says. “I like to learn about my surroundings and the history of everything.”

Mostly what she’s learning is how different cultures can be even when you speak the same language.

“It’s so different. I love it here, though. I haven’t locked myself in my room and felt homesick once,” she says. “I’ve felt so welcome here. There’s this view that at some point you’re supposed to go into depression and feel really homesick. But it’s not like that. You miss home all the time and you enjoy being here all the time.“

You can read about Eveie Robinson's take on life at the University of South Carolina in her blog.