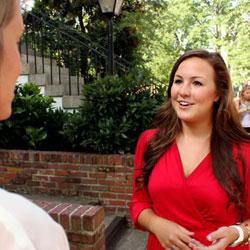 Sarah Ferraro, junior broadcast major, talks with prospective students about why she chose Carolina as president of the Gamecock Connection.The program is run by the Office of Student Engagement.

In high school Sarah Ferraro didn’t imagine herself at USC. A few years later, she says she can’t picture herself anywhere else. Carolina is her home.

That’s why the junior broadcast major has dedicated her free time to giving back to her university as a part of Undergraduate Admissions’ Gamecock Connection program, which trains current students to speak with prospective students about the university.

“I love just getting to be the first impression that people have of Carolina, especially going to college fairs,” says Ferraro, the president of Gamecock Connection. “Sometimes you’re talking to sophomores in high school. Some of these kids don’t know what they’re going to do and haven’t started thinking about college. I get to tell them what it’s about.”

Current students are just the beginning. Alumni across the country can join the Gamecock Alumni Recruitment Network — or GARNET for short — to meet with prospective students and parents living in their cities, spreading Carolina’s reach far and wide. Working alongside USC’s regional representatives, alumni can visit college fairs, meet with counselors, and talk to potential parents and students.

It was an easy decision to join the alumni network for Nicole Hark, ’07 international studies, who came to South Carolina from Maryland and spent four years as a university ambassador. When she returned to her home state after graduation, she wanted to share her love for USC with others in her area.

“USC gave me so much in terms of opportunity, education, knowledge and a great love for that community,” says Hark, who lives in Baltimore. “It also gave me a desire to expand that to people in Maryland. I have a soft spot for folks here to go down to South Carolina. I want to share that enthusiasm and passion with them.”

Both programs have been successful so far, says Alexandra Scovel, assistant director for volunteer programs with admissions. Last year Gamecock Connection had 40 volunteer student members and GARNET had 175 members spread throughout every state. Both programs are expected to grow this year.

“If you can show parents and students the hospitality that Carolina is known for, that even though we’re a big institution we’re invested in the students’ well-being, and that if they come here, they’re not just a number, I think it can make a big difference,” Scovel says. “It gives us a way to show who our amazing students are and the types of experiences they are having here.”

Ferraro says having current students speak with prospective students makes a difference, one she’s seen firsthand. One admitted student told Ferraro she submitted her deposit after speaking with a Gamecock Connection student.

“As students, we’re only a couple years older than the high school students that we’re recruiting, so we offer a different perspective,” she says. “We have students from all over campus and it helps as a potential student to talk to someone in your path.”

Alumni can tell students about what happens after graduation. They can tell future Gamecocks how USC influenced the course of their life, Scovel says.

“For students, it gives them a chance to see a potential career, and they can envision what paths there are after Carolina,” Hark says.

Both programs, which launched two years ago, continue to gain momentum and expand USC’s reach. But, for Scovel, the most impressive part has been the volunteer students and alumni giving time to pass on the Gamecock legacy.

“So many people love Carolina and want to give back,” Scovel says. “I’m blown away by the interest.”