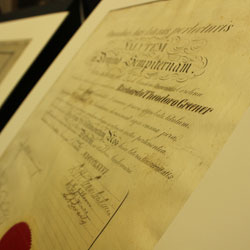 The law diploma earned by Richard T. Greener, the University of South Carolina's first African-American faculty member who taught philosophy and worked as the university's librarian during Reconstruction, is back at USC.

The law diploma earned by Richard T. Greener, the University of South Carolina’s first African-American faculty member who taught philosophy and worked as the university’s librarian during Reconstruction, is back at USC.

Greener’s diploma, along with his license to practice law in South Carolina, was discovered in an abandoned Chicago home scheduled for demolition. The documents and some old books were found in a steamer trunk stored in the attic, and were removed from the house by a construction worker just before the house was torn down.

The discovery was exciting news for USC officials, who jumped at the chance to obtain a piece of the university’s history during Reconstruction, the four years from 1873 to 1877 when the school was open to African-American students. University archivist Elizabeth Cassidy West and history professor Bobby Donaldson traveled to Chicago in 2012 soon after learning about the find, anxious to see what had been saved from the building.

“At no point before our trip was there any indication that a USC diploma existed within the discovered material. When we visited the home of a gentleman in a working class area of Chicago, I had no idea that we would find one of the most extraordinary documents I’ve seen concerning a largely misunderstood chapter in the university’s history,” Donaldson said. “Elizabeth and I had been in search of a diploma earned by a student during Reconstruction. That the diploma we have was earned by the first known African-American professor on campus makes it doubly significant.”

For West, the acquisition of the diploma helps further tell the university’s story.

“I was absolutely thrilled when I unrolled the document and saw the university seal on it,” West said. “It wasn’t just because of who Greener was. This filled a gap in our university’s history. We did not have a diploma from one of our African-American graduates during Reconstruction. It was my holy grail of university history. There’s not a lot of research value in a diploma, but there is a lot of symbolic value.”

Tom McNally, dean of University Libraries, said it was important for Greener’s diploma to come back to USC.

“I recall sitting in my office waiting for the call from Chicago. There was a great deal of excitement in the car when Elizabeth called me on their ride back to the airport. I knew the next step was to negotiate a price and find supporters who would help us secure the documents,” McNally said.

McNally said Columbia Mayor Steve Benjamin worked with leaders in the African-American community and Columbia’s law and library communities to ensure the documents would come to the university.

Greener’s USC diploma and law license will be housed in the South Caroliniana Library on USC’s historic Horseshoe – Greener’s workplace at the university from 1873 until 1877.

“By bringing back and filling in missing pieces in some small way we’re trying to bring attention to an important part of the university’s history. For many years that time was looked at as dark days, when it was actually four years of hope for a marginalized community,” West said. “Those four short years were full of hope for freed African-Americans who could get an education and fully be part of society.”

After the Civil War ended, black trustees were named to the university’s board, followed by a black faculty member and students. The majority of the student body was African-American in the four years of Reconstruction, although some white students and faculty members remained at the school.

“The hiring of an African-American professor and the admission of black students — less than a decade after the end of slavery—were part of an extraordinary and daring experiment,” Donaldson said. “Against the backdrop of Reconstruction, African-American students sought to advance their education even as they fought to overcome widespread doubts about their mental and intellectual ability to succeed. Imagine the striking irony in 1873 of looking upon the Horseshoe or touring Rutledge Hall and witnessing men and women of color as students at the most influential institution of higher learning in South Carolina.”

Greener, the first African-American to graduate from Harvard, was a product of the best schools in the country, and he was able to recruit talented students to USC.

“When you look at the roster of students from 1873 to 1877, you’ll find some of the most gifted African-American students and intellectuals in the country,” Donaldson said.

The era of Reconstruction ended soon after Wade Hampton became the state’s governor in 1876. USC closed at the end of the 1877 academic year and opened three years later as an all-white institution.

“Even as the period of Reconstruction came to an abrupt halt and even as the forces of white supremacy sought to uproot important political and social advances, Professor Greener and many of the students he mentored believed that emancipation was an ongoing and never ending struggle,” said Donaldson, a faculty member in the College of Arts and Sciences. “Their efforts and their vision laid the groundwork for the change that gripped our nation in subsequent decades. Our archival records show very clearly that the architects of the Modern Civil Rights Movement were astute students of history and understood the goals and ‘deferred dreams’ of the Reconstruction era.”

West said USC, in the midst of commemorating the 50th anniversary of desegregation that came in 1963, “wants to emphasize that African-Americans have always been an integral – though long unrecognized – part of the university.”

Through the exhibit “1801-1963: The Long Road to Desegregation at the University of South Carolina,” the library takes a comprehensive look at the roles African-Americans have played on the campus since its beginnings in the first days of the 19th century until three students desegregated the university in 1963. The exhibit includes records that show the type of duties performed by enslaved African-Americans on campus, information about the African-American students who attended during Reconstruction and documents and images that detail the university’s fight against integration and final plans for a peaceful desegregation. The exhibit is on display in South Caroliniana Library’s Lumpkin Foyer through Dec. 20.

First African-American professor at the University of South Carolina, teaching at USC during the era of Reconstruction, 1873-1877

Born Jan. 30, 1844 in Philadelphia. Greener grew up in Boston and attended Oberlin and Phillips Academy before entering Harvard. He became Harvard’s first African-American graduate in 1870.

In 1873, he came to South Carolina. In addition to teaching philosophy, Latin, Greek and law, Greener served as librarian and helped reorganize and catalog the library's holdings, which were in disarray after the Civil War.

Earned a Bachelor of Law degree from USC, among the first black graduates of USC’s law school. He was admitted to the South Carolina Bar in 1876.

While at USC, Greener lived in Lieber College on the USC Horseshoe and worked at South Caroliniana Library.

When the university was closed by South Carolina’s government in 1877, Greener took a job as a clerk in the Treasury Department in Washington, D.C. He also was a professor in the Howard University Law School, and he served as dean of the school.

He began a law career in Washington in the early 1880s.

He served as secretary of the Grant Monument Association in New York in 1885, and later as U.S. commercial agent to Vladivostok, Russia.

Greener left the foreign service in 1905-06, settling in Chicago with relatives in 1908.