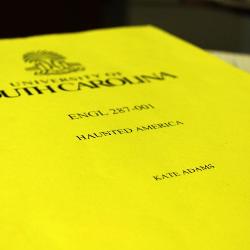 For Katherine Adams, haunted stories aren’t just meant to be scary. Stories that give readers chills can also help students learn the fundamentals of English literature.

This semester, in her English course, Haunted America, students are learning how to interpret literature and write about it by reading haunted stories and poems. These aren’t your traditional ghosts stories, though.

“It’s in part about actual ghost stories but also includes poems, stories, essays and novels that are haunted by silences or memories,” says Adams, an associate professor in English, who specializes in African-American studies and women’s writing.

Adams has long been fascinated by what isn’t said in literature.

“I’ve been personally interested in writers who get at what can’t be said directly through the design of the text – the conspicuous gaps, the loud silences,” she says.

That kind of literature can be important for young English students and the course, ENGL 287, is required for English majors.

“The big point of this course is teaching students to read between the lines, behind the obvious meaning,” she says. “A course that’s all about what’s under the surface sets that up really well for them. It’s also just fun.”

Adams’ specialty with 19th-century U.S. and African-American writing is the perfect fit for teaching a class on haunted literature. She points to writing by Charles Waddell Chesnutt, an early African-American author who wrote tales about conjuring and voodoo set before and after the Civil War.

“He uses ghosts and conjure as a way of writing about the power dynamics between enslaved people and the people who enslave them and about how those dynamics extend into the post-emancipation period to haunt race relations at the end of the century,” she says.

Daria Afshar, a junior English major in the class, has been drawn to the stories about mill workers by Rebecca Harding Davis, stories by Nathaniel Hawthorne and “Whispering Leaves” by Ellen Glasgow. The texts get spookier the more real they seem, she says.

“I’ve always been fascinated with superstitions, the unreal and supernatural and the writing always makes for interesting reads,” says Afshar. “It’s dark and when you read it, it sends chills down your spine. It’s captivating in a way.”

The class dissects these texts together, talking through the hidden, haunted meanings. Sometimes this process can completely change how Adams herself reads a particular text. And to her, that’s the best part.

“That’s why I’m an English professor. I love reading and I love the openness of literary expression. It creates a space where anything can happen and it takes a lot work to figure out what is happening. That’s the kind of work that I like doing with students, giving them the tools for discovering there’s much more happening in a story or poem than meets the eye,” she says. “And then, I get to explore it with them. We get to do it together.”