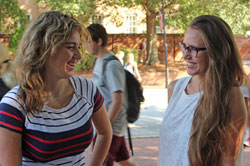 For Claire Thompson, the decision to become a “buddy” with an international student at the University of South Carolina was an easy one.

“I’m fascinated by international students. I think some of the most interesting people on campus are people from other countries,” said Thompson, a junior from Philadelphia majoring in international business and global supply chain management with a minor in Spanish.

Thompson, along with 145 other American students, has agreed to be a buddy with 160 international students. This is the second semester USC’s Office of International Student Services has paired American and international students in a formal buddy program, a cultural exchange program that allows students to learn from their peers, be comfortable in their new surroundings – and make a few new friends. Some of the Americans are students who have studied abroad, some want to improve their foreign language skills and others just want to help newcomers learn the ropes.

“Seventy percent of our international students say the need to acclimate in the first three months is crucial,” said Binda Niati, international student adviser at USC, adding that students are dealing with homesickness, culture shock and adjustment to a new education system. “We have really caring students who want to help out and who want to learn about other students’ cultures. This is a great way to stop misconceptions. These connections can help erase the idea that students from other countries are ‘the other.’”

The largest international student populations at Carolina are from India and China, with many of the exchange students coming from Western Europe, she said.

Thompson and her buddy this semester, Anastasia Papagni of Zurich, Switzerland, got to know each other the first week of classes, going out for sushi together.

“It’s great. I’ve heard freshman say they are jealous of me for having a buddy,” Papagni said. “You need to have a person you know you can go to ask all your questions.”

For Thompson, the relationships with Papagni and her buddy last semester (a student from Germany) have exposed her to international cultures. She is still in touch with her buddy from last semester, a graduate student in international business at Carolina’s Moore School. And this spring, Thompson will be studying abroad in Santiago, Chile.

“Last year, because I was buddied with a student from Germany, I got to know people studying abroad from other countries, too. I made friends with people from Finland, the Netherlands and India. That made last semester the most incredible semester of my life. I got to hang out with people from all over the world.”

“As somebody who studied abroad before, I knew how different things can be. You have to learn how to get around, how to do this, that. I had a program director in Spain who really helped me.”

His international experience has even changed his career goal. Initially he expected to look for work in the public sector, possible with the U.S. State Department. Now he is interested in a career in international higher education.

Last spring, Chambers and his buddy from Scotland ate lunch together every Friday in the Russell House. Chambers took his new friend to a baseball game.

“I tried to get to know him and do ‘American’ things with him,” he said. “Hopefully this semester I’ll have a similar experience. Maybe this semester it will be football.”