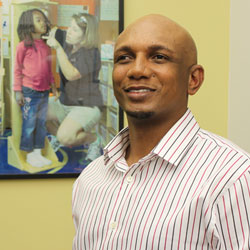 The Arnold School for Public Health boasts nationally ranked programs for both undergraduates and graduate students.

Kevin General is a Columbian through and through. “I was born and raised here. I’ve lived a lot of my life here,” said the 38-year-old senior majoring in public health.

His hometown and its people have shaped his views and helped give rise to his professional ambitions. He’ll be heading to graduate school next fall, with plans of earning a doctoral degree in public health, and he’ll be taking with him a clear idea of how he plans to help make the world a better place – for everyone.

“I want to do research that helps alleviate the disproportionate burdens that exist for certain populations,” General said. “I’d really like to help address health inequities.”

He has experienced some of those already. He was diagnosed with colorectal cancer in 2005 at age 30. Because he was underinsured, some procedures that might have helped were not options for him. After two rounds of chemotherapy, he was told he had six months to live.

At that point, he had a choice: painkillers to make the last months of his life more comfortable or another course of cancer treatment. He seriously considered the former, but someone convinced him otherwise. “It was really my mother who got me through that,” General said. “She told me I had to fight and I did. And that round of chemo plus radiation sent me into remission.”

Dealing with illness, and not just his own, has been a part of General’s life. After graduating high school in 1993, he spent time working in Atlanta until his mother, Vanessa, came down with a rare illness called Moyamoya disease. He returned to help care for her in 2002, only to find himself diagnosed with cancer a few years later. Remission in 2007 allowed him to continue looking after his mother until she died in 2009 at age 51.

His experiences helped mold his outlook. “It really opened my eyes to the social and environmental determinants of health,” he said. He set out to earn a college degree, taking classes at Midlands Tech before transferring to USC.

Originally a biology major, he moved to the Arnold School of Public Health “because I wanted to deal more with people,” he said. And a local event caught his attention.

The Edisto Court neighborhood near the center of Columbia awoke to some very unwelcome news in the summer of 2012. Arsenic and lead contamination had been found in the soil where dozens of homes are located. Subsequent investigation led officials to conclude that the contamination resulted from a fertilizer plant that operated nearby in the early 1900s.

General wanted to be part of the solution – for this particular problem and for similar ones in the future. As a member of the TRIO Ronald E. McNair Post-Baccalaureate Achievement Program, he began an undergraduate research project aimed at better understanding how information flowed to the people who needed it most in this situation, the residents of the area.

He’s using the two-step flow theory of mass communications as a foundation for the research. “It’s very well established,” he said. “It’s a way of following how information flows from media outlets and other sources to thought or opinion leaders in a community and then to the people themselves.”

He began with an analysis of the content provided by the media and governmental sources. “One thing that I found is that none of the governmental materials addressed possible health issues,” he said. “Arsenic is known to increase your chance of getting cancer. And exposure to lead can lead to a diminished learning capacity, especially in kids. But the government’s materials never mentioned any of that.”

He also looked at the reading levels of the materials that the media and government produced in relation to the Edisto Court situation. “In both cases, they were too high,” he said. “On average, the reading level required a 12th-grade education, and in this lower income neighborhood with a lot of older residents, many of the residents had never reached that level of education. So it’s clear that in order to understand the situation, the residents will need to reach out to opinion leaders in the community.”

This fall, General is continuing his research with a Magellan Guarantee grant, working with mentor Sara Corwin, the director of the undergraduate program in public health. He will complete surveys of opinion leaders and residents, hoping to find concrete ways in which he can help the residents comprehend the consequences of their exposure. He also hopes to develop plans for releasing better information in related incidents from a public health perspective. The work he has done has earned him recognition at a national conference in Atlanta this summer, where he earned first place in the social sciences division for his research.

He’s pleased to earn awards on a public stage, but his reasons for doing the work are personal.

“I had friends who lived in Edisto Court,” he said. “As a child I would go over there and play with middle school friends.

“I think it’s important to look deeper into it, because the people who live there had no idea that this contamination was there, and it was there for a very long time.”