Roots in a 'precious mountain' 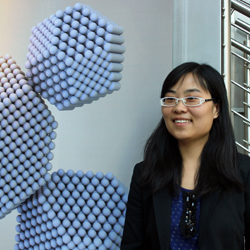 Lingling Zhang works in the Horizon building, with some of the best-equipped laboratories available.

USC’s strength as a center for fuel cell research was a major reason Lingling Zhang chose to come to Columbia as a doctoral candidate, and she’s doing her part to burnish Carolina’s reputation. This fall, she earned the top student researcher award at the Fuel Cell Seminar & Energy Exposition in Columbus, Ohio.

USC took four of the seven student researcher awards: first and second place to Zhang and Xuan Zhao, respectively, and two of the four honorable mentions to Xin Li and Sungtak Kim. The other award winners were from Harvard, the University of Connecticut and Loughborough University in the United Kingdom.

Fuel cells generate electrical energy with exceptional efficiency, and Zhang is part of an international network of researchers striving to make them an integral part of a sustainable energy landscape. Fuel cells originally were powered solely by hydrogen, but Zhang works with solid oxide fuel cells, which, because they operate at high temperatures, can reform other energy sources to power fuel cells.

It was her work in improving the materials that go into a fuel cell — specifically, the electrolyte — that earned her the top award at the conference. The electrolyte materials she’s helping develop have applications beyond fuel cells as well: They also represent a promising membrane for separating carbon dioxide from other gases in power plants. That could go a long way in the effort to capture and store carbon dioxide, a greenhouse gas, before it goes up the smokestack.

“Nowadays, we have to worry about fossil fuels,” she said. “There are a lot of areas to work in renewable energy. The fuel cell area is just one of them. Maybe for now they are not very portable devices, but I believe in the future they are very promising.”

Zhang saw a glimpse of what that future might be when she attended the exposition. The conference was organized primarily by members of the fuel cell industry. That’s a departure from most conferences, which are typically organized by academics.

“It was very helpful to meet people from the other side,” Zhang said. “It’s a very good experience.”

The experience included the opportunity to drive a fuel-cell-powered car, a number of which are now on the road in California, she said. “I was surprised by the pickup of the car,” she said. “It’s really good.”

Zhang’s long-term goal is to secure a faculty position at a university and she’s well on her way. Working in the laboratory of adviser Kevin Huang, an associate professor of mechanical engineering, she defended her dissertation earlier this semester, less than three and a half years after starting graduate work at USC.

To continue her research career, she’ll probably have to make a choice between China and the U.S., and South Carolina is making its case with her.

“I like this country,” she said. “I particularly like the weather because I come from the northern part of China, which can be very cold, minus 20 or 30 degrees Celsius in the winter.”

Zhang is from the outskirts of Chifeng, a city in Inner Mongolia in northeastern China, about six hours north of Beijing. “My town is called Yuanbaoshan. Yuanbao means precious, kind of golden. That’s because in our hometown we have coal. We believe coal is very precious, so that is what we call our town. Shan means mountain.”

But warm weather is not the only draw. “USC is very good in the fuel cell area, “she said. “We don’t even have enough space for all of the students right now.

“Also I very much enjoy the culture here. In the United States, there are many cultures. I have so many different friends, not only Americans, there are also some from Bangladesh and other countries. I really enjoy this; I’ve never experienced that before.”