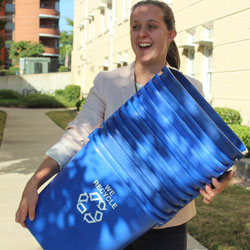 Setting a course for sustainability

Margaret Bounds works to be sure students living on-campus learn the importance of sustainability – and put it into practice.

Students moving onto campus last month took full advantage of the recycling bins around the residence halls. The amount collected during moving in weekend increased by more than 10 tons this year, with 46,040 pounds collected and recycled.

That’s great news to people like Margaret Bounds, the university’s coordinator for environmental sustainability for University Housing Facilities Operations. It’s Bounds’ job to be sure students living on-campus learn the importance of sustainability – and put it into practice.

“I like the idea of capturing students when they are first on campus. Most of our freshmen live on campus and that’s the moment when you can change their behavior,” Bounds says.

In her fourth year on the job, the successes are adding up.

Bounds became interested in environmental sustainability early, growing up in Carlisle, Penn., where her parents taught the family about recycling and conservation. The interest got stronger when she became involved in Model U.N. in high school, where she learned about successes and gaps in environmental policies around the world.

That moved her to major in environmental policy at Barnard College in New York City. She studied abroad in Bangladesh and researched and wrote her senior theses on arsenic in ground water. She earned her master’s at the University of East Anglia in England, a university known for international development studies.

Those experiences steered her toward working with sustainability education or non-profits.

Since arriving at USC in February 2010, Bounds has expanded the EcoReps program – a peer-to-peer leadership program in University Housing that works to promote sustainability in residence halls -- and collaborated with other groups around campus on sustainability projects. She also personally makes sure there is a recycling bin in every residence hall room at the start of the school year.

But the project she is most proud of is the success of the “Give it Up for Good” yard sale. The university had long collected unwanted items from students as they moved out of residence halls and donated the clothing and furniture to charities. Bounds and her staff started selling the donated items two years ago at a mega-yard sale. This year, more than $10,000 was raised and donated to Habitat for Humanity. That money will be used by Habitat to rehab a house this fall – with the help of USC students and staff.

Bounds says more students are arriving at USC with an interest in sustainability efforts. Many were in high school recycling clubs and are interested in joining groups like the eco-reps. “They are asking us, ‘Where is the recycling bin?’ before we even show them. They have a lot of passion for sustainability.”

As for the large increase in recyclables collected during move-in weekend, Bounds attributes it to several factors including the addition of distinctive collection bins, the early move-in for sorority recruitment which allowed USC staff to empty the recycling dumpsters before the second round of move-in, and even the rain, which caused the custodial staff to properly dispose of much of the cardboard. USC collected 23 tons during move-in last month, up from 12 tons in 2012.

“People don’t expect USC to be doing as much as it is,” Bounds says. “There’s a lot to be proud of here.”