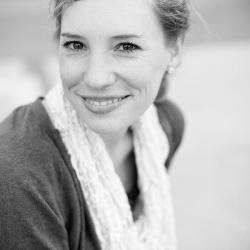 UPDATE: Maria Fabrizio, a 2008 BFA graduate and freelance graphic designer/illustrator, was interviewed Jan. 10 on National Public Radio for her Wordless News blog. Her blog, which features daily illustrations based on news events, will appear on NPR.org the week of Jan. 13-17 when Fabrizio will base each day's illustration on an NPR news story. — CH

Fabrizio earned a BFA in studio art at USC in 2008 and was a graphic design apprentice and adjunct instructor after completing an MFA at Virginia Commonwealth University. She’s now a freelance graphic designer and illustrator in Columbia.

On Feb. 11, 2013, the day of the historic papal pronouncement, Fabrizio sketched a simple drawing of a mitre — the pope’s tall ceremonial hat — hanging from a hat rack. Her image succinctly captured the essence of the startling headlines: the pope was calling it quits.

“Someone walked by my desk, saw the drawing and laughed. She got it without me saying a word,” Fabrizio said. “I put the image on my blog and got about 20 emails from people saying, ‘Do another one tomorrow.’”

She did. And the next day and the next. In fact, every weekday morning since Feb. 11, Fabrizio has been scanning the news, then creating a single illustration and posting it on her blog, Wordless News. The blog’s stated mission: one headline per day, vowel and consonant free.

The images, all original drawings or watercolors, have mirrored mainstream news — like Obamacare and the government shutdown — to news of the weird. “I go to CNN first, then New York Times, NPR and the Washington Post,” she said. “More often than not, I focus on a story that’s more obscure than the main news of the day because that repeats itself so much — I’m not going to do 20 images on the government shutdown.”

The routine demands discipline, a love of news and an aversion to sleeping in, which plays to Fabrizio’s strengths.

“I’ve always been a morning person,” Fabrizio said. “So much so that I hated sleepovers as a kid. I didn’t want to lay around in bed all morning.”

Monday through Friday, her morning routine begins at 4:50 a.m. After breakfast and scanning the day’s headlines, she’s off to the office by 6:15 (she leases a small work space at the Weco building which is home to Riggs Partners, True Matter and The Bigger Design.) “I start sketching ideas and work on it until I think it’s ready, ideally before 10 a.m. but always by noon,” she said.

Fabrizio has retroactively completed images for the beginning of 2013 before she started Wordless News. She’s also done images for the days she’s been on vacation. The original plan was do the blog for a year, but that could change.

“It’s something people really enjoy, and I would like to make this a larger part of my career,” she said.

The daily routine has become part of the fabric of her life, digesting each day’s headlines, then providing for her blog followers — vowel and consonant free — a daily offering of art.