Families come to Carolina for football, fun and, oh yeah, to visit their students 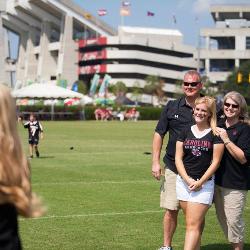 Parents Weekend starts Friday with classes, a reception and a party at The Strom.

Mary and Gregg Pelowski of Ellicott City, Md., have been coming to Parents Weekend since their daughter Julia, a senior in fashion merchandising, started her career at Carolina.

“We came to experience the college atmosphere that our daughter had spoken so highly of, to meet her friends, to see where she lived and to participate in all the wonderful activities that were being offered for the parents throughout the weekend,” Mary Pelowski said.

They have come back each year, primarily to visit with Julia, but also to enjoy the festive weekend – especially the football game.

“We also enjoy immensely the tailgate party,” Pelowski said. “We like that the band makes an appearance, we like the music there, the food and just the college atmosphere.”

The family also has participated in several of the educational sessions offered, including one on study abroad, which Julia completed this past spring, studying in London.

The Pelowskis have seen the numbers of other families grow markedly in their years at the event.

In 2007, Parents Weekend drew about 3,000 people with five events on the schedule. This year, nearly 10,000 people have registered for dozens of special events, and another 10,000 are expected to come on their own and simply visit with their students, said Jerry Brewer, associate vice president for student affairs and academic support.

“I have not seen a parents weekend with the numbers that we have,” Brewer said. “We’ve about outgrown every facility that we use. We’re pitching circus tents everywhere.”

The growth can be attributed in part to a national trend of parents being more engaged with their college-age students.

“But actually coming and visiting for the weekend, I think most of that can be attributed to the wonderful environment that we have here, the excellent programming, and it’s just fun,” Brewer said.

The bulk of families visiting are coming from outside South Carolina (77 percent) to see their first-year students. For many, it will be the first real chance to see students since they left home two months ago to start their college careers. Families are traveling from 40 U.S. states, including Alaska, and three countries, including Japan.

And it’s not just parents. This weekend’s 9,840 registrants represent 2,856 families – so that means there will be lots of brothers and sisters, grandmas and grandpas, and aunts and uncles in the mix.

In addition to the allure of reconnecting with their students, parents also are taking advantage of some excellent learning opportunities, including a lecture on butterflies’ reaction to climate change, classes on nutrition and exercise and many opportunities to sit in on a University 101 class.

The weekend kicks off with classes on Friday and a reception that night at the President’s House followed by the beach bash at the Strom Thurmond Wellness and Fitness Center, where out-of-state visitors will be treated to some Southern culinary delights – shrimp and grits, barbecue and peaches, banana pudding – plus classic Carolina beach music.

The big event is the home football game Saturday between the Gamecocks and the Kentucky Wildcats, preceded by a traditional tailgate at Gamecock Park.

On Sunday, several colleges, schools and organizations will host brunches and picnics.

“I have a lot of parents tell me, ‘You know, my kids are going to school and I want to enjoy their college experience,’ so they’re kind of reliving theirs a little bit,” Brewer said.

Jerry Brewer, ’78 BA political science, ’80 MEd student personnel services, has worked at Carolina for more than 33 years. He says one Parents Weekend particularly stands out in his mind because it happened just days after 1989’s Hurricane Hugo ripped through South Carolina on a Thursday, causing billions of dollars in damage. “It was the Georgia Tech game. We woke up Friday morning and it was absolutely beautiful. Nobody had electricity, but we had Parents Weekend. I drove the bus for that because the bus drivers didn’t show up.”