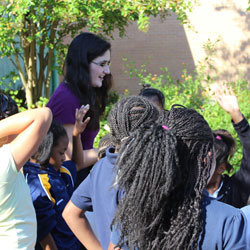 The final bell at Joseph Keels Elementary in northeast Columbia doesn’t end the school day for a group of fourth- and fifth-graders on Wednesday afternoons. The classroom where they gather – the science room – is always full when Carolina senior Leila Heidari starts her after-school gardening program.

Early this semester, the kids started planting in the school’s small garden plots under Heidari’s tutelage, but the goal is more than just showing children how to grow vegetables. For example, she recently had the kids do a “multisensory taste-testing” exercise, and the subject of their scrutiny was a variety of tomatoes, from a variety of places.

“So who liked ‘tomato No. 4’ the most?” Heidari asked the group. “Did it taste the way you thought it would?”

Before starting the tasting, she asked the students to record details of some other observations. What did the tomato look like? How did it smell? Some were surprised that a tomato that didn’t look all that great actually pleased their palate the most.

The idea is to increase their awareness of food and about intangibles that you can’t see, smell or taste as well. “Two of these tomatoes were grown right here in South Carolina, not that far from here. The other two were from California,” she told the students, showing them the locations on a map. The students had perceptive questions about what all that traveling might mean for the tomatoes – how long it might take, whether they might spoil on the trip and what sort of container would keep them from getting “messed up” on such a long drive.

In the garden, the kids get their hands dirty with planting and weeding. In the classroom, Heidari covers topics from soil science to the differing nutritional content of the vegetables they’re growing. “We have themes relating it back to health and how we, as people, are part of the food system and the environment,” she said.

When I was applying to colleges, I originally thought I wanted to go out of state. But I knew I was interested in research and USC is a big research institution. And the Honors College has that small, liberal arts college appeal that I was also looking for. So I realized through my search that USC had everything that I was looking for.

Heidari is making the most of her experience as a Baccalaureus Artium et Scientiae candidate, known by its acronym BARSC. The South Carolina Honors College degree program allows undergraduates to fulfill the requirements for both a Bachelor of Science and a Bachelor of Arts with an individualized, interdisciplinary curriculum students develop themselves with faculty guidance.

“I was a biology and psychology double-major at first, and I realized that what I really liked exploring in biology and psychology had to do with the intersections between public health and environmental science,” Heidari said. “I decided that instead of patching something together with minors, I could pursue environmental health sciences directly as a discipline with the BARSC.”

That helped settle the academic focus of her experience at USC, but Heidari wasn’t content to stay within the cozy confines of the campus as an undergraduate.

“Whenever I heard of students doing projects in the community, it always sounded inspiring to me. So I decided that if I’m going to do an honor’s thesis, I want it to benefit the community. I really wanted to give back,” said Heidari, a native of Columbia.

Her mentor Christine Blake was perfectly situated to help in that regard. An assistant professor in the department of health promotion, education and behavior in the Arnold School of Public Health, Blake has developed a relationship with several of the teachers and administrators at Joseph Keels Elementary. With Blake’s input, Heidari crafted a proposal to work with the elementary school staff on an after-school gardening and education program that won grant money from USC’s Magellan Scholar program, the Richland Soil and Water Conservation District, and Sustainable Carolina.

Heidari worked over the summer to prepare the teaching curriculum that she’s using with the kids this fall and will further develop next spring. It made for an interesting summer: She also was working at the Centers for Disease Control in Atlanta at the time. “It was really exciting to be at the CDC and complete a research project and I did the curriculum development and the internship at the same time,” she said. “I really kept myself busy this summer.”

But the work paid off. Her after-school program is capped at 20 students and more than that would like to attend. “Some of our kids just don’t get to see a lot,” said Delta Keith, the science teacher at Keels elementary. “Most of them live in apartments and a lot of parents prefer to keep them inside just to be safe.”

For Heidari, USC has helped her focus on what’s important, both inside and outside the classroom. “I was always interested in a variety of things in high school,” she said of her time at Cardinal Newman, a Catholic school in Columbia. “I was really still just searching when I came to college.

“When I was applying to colleges, I originally thought I wanted to go out of state. But I knew I was interested in research and USC is a big research institution. And the Honors College has that small, liberal arts college appeal that I was also looking for. So I realized through my search that USC had everything that I was looking for.”