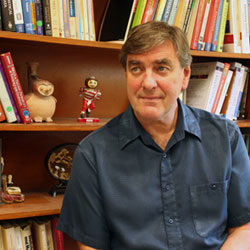 Fraud is a parasite on our health care system; estimated losses range between $50 billion and $150 billion yearly in the United States. USC’s Don Edwards is working hard in the fight to recover that lost money, and the tool he uses might be a little unexpected: statistics.

“It was somewhat surprising to me, but my business, statistics, is absolutely center stage in the battle against health care fraud,” said Edwards, a professor of statistics and former chair of the department in the College of Arts and Sciences.

According to Edwards, health care fraud is both difficult to find as well as prove. First, you have to find abusive providers, and they might be doctors, hospitals, ambulance services, providers of power wheelchairs, or any of a wide range of groups that bill Medicare. “One way to do that is through data mining, which involves terabytes of health care data,” he said. “It’s really finding a needle in a haystack.”

The next step is an audit of a provider flagged as potentially abusive. That’s where Edwards is heavily involved, advising local company Palmetto GBA and U.S. attorneys on preparing a sampling plan of the billing data that will withstand the rigors of a trial.

A case might involve thousands of transactions, and examining each of them in detail to determine whether the payment was valid would be impossible. Instead, a smaller sample of the transactions is thoroughly audited, and payments in the sample found to be invalid are used to project the amount invalid in the full number of transactions.

“You have to prepare the sampling plan like a tank. You have to defend everything you do in court, under oath, against a very aggressive, well-funded team.”

“It’s not unusual for the provider to challenge the statistical methods,” said Edwards. “They have that right, legally.”

Edwards began working as a consultant in the field in 2000, starting with Palmetto GBA, a large subsidiary of Blue Cross Blue Shield with offices in Columbia that contracts with the federal government's Center for Medicare and Medicaid Services (CMS). In just a little over 10 years, Edwards has testified some 30 times in trials all over the country.

One reason he is so sought after is simple: he and several alumni of USC’s statistics department devised a new sampling strategy that was widely adopted. Published in 2005 in the journal Health Services & Outcomes Research Methodology, it remains a standard in the field today.

He worked with then-Palmetto GBA employees Gail Ward-Besser and Jennifer Lasecki, who earned their master’s degrees from USC’s statistics department in 1988 and 1997, respectively, on the sampling strategy. Two other USC alumni, Brenda Parker and Kristen Wieduwilt, both epidemiologists working with Blue Cross Blue Shield, contributed as well, as did a USC biostatistics alumnus, Fuming Wu.

“It’s a better way to handle the data,” said Edwards. “It’s more robust and conservative than methods that have been used classically.

“And it’s gained acceptance. You go to a national meeting and mention this method – ‘the minimum sum method’ – and they know what it is.”

Working with former students who had earned his respect was key to his signing on with Palmetto GBA as a consultant.

“They have a monthly meeting of technical folks at Palmetto GBA, 40 or 50 people, and probably more than half of them got their degree from Carolina. And a dozen or more over the years came from our department.

“It was a motivation for me to take on this consulting work because I was approached by the long-time leader of the group, Gail Ward-Besser, who has done wonderful things in her own right,” said Edwards. Ward-Besser just retired from Palmetto GBA, joining USC's statistics department as a full-time instructor.

Developing new and better tools to fight health care fraud is essential, given the scope of the problem, and Edwards continues to push forward. He’s working on another sampling method, again with Ward-Besser and Lasecki, termed “conservative pennysampling,” which is described in a paper now in press in the Global Journal of Health Science.