Making the most of college 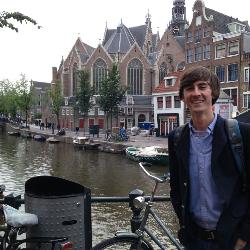 One attribute of true leadership, experts say, is having the confidence to break away from life’s conventional, easy paths.

Coy Gibson, a senior political science major at USC, wouldn’t have it any other way.

While many students drift through college, Gibson decided early on to make the most of his experience. He says his exposure to USC’s Leadership Initiative in his sophomore year planted the seeds early for wanting do something different. He credits Kirk Randazzo’s leadership class for his successful run for Student Government treasurer in 2012.

“You try to go into every class open-minded, but that class was different. I took so many notes that my hand ached,” he says. “We learned how to give speeches, how to organize groups, bring people together and make teams work. I still remember the ‘three Ds of Leadership—dynamic, different, dependable.’ These are things we learned that you can put into your daily life.”

Those skills were especially useful during Gibson’s stint as a Capstone resident mentor during his sophomore and junior years. He spent many nights coaching, reassuring — and occasionally intervening — when college life seemed overwhelming to some of the 40 freshmen a year assigned to him.

“Housing does a great job training our RMs, and you never know what you’re going encounter. You have to stand in front of all these freshmen and be able to have the confidence to explain what college is like and that you’re there for them during that transition. You’ll be able to respond if you have trust in your training,” he says.

Fresh from spending this summer interning at the Anne Frank House in Amsterdam, Gibson is now in Brazil, where he’s learning Portuguese as part of a study abroad program. In Amsterdam, Gibson helped organize the South Carolina leg of an international Anne Frank touring exhibit, which will make a stop at his high school alma mater in Kershaw County.

“I’d never been out of the country before this year. My mother has never left the country; my father has only left once. They encouraged me to travel abroad, to experience the world in ways they had not,” he says.

Gibson plans on returning for one more semester as a resident mentor when he returns from Brazil. After his graduation in May, he’s not sure what’s next, but is leaning toward a “gap year” spent traveling across the United States.