Organizing solutions with the Chapman Conference 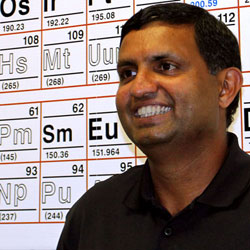 Comfortable in the chair

Venkat Lakshmi served as chair of the department of Earth and ocean sciences for three years. Check out their website.

Venkat Lakshmi recently assumed chairmanship of the American Geophysical Union’s Chapman Conference program, and in that capacity he plans to continue what he’s spent his professional career doing: bringing people together to create solutions.

“In science today, it’s not just a person sitting in a closed room, working on a problem,” said Lakshmi, a professor in the department of earth and ocean sciences in the College of Arts and Sciences. “For most of the important discoveries these days, it’s about people working in teams, exchanging ideas and coming up with solutions.”

That’s exactly the idea behind AGU’s Chapman Conference program. For more than 35 years, the program has sought to bring together scientists, from graduate students to senior research directors, in an environment conducive to discussion and reflection. Five or six timely topics are selected for a Chapman Conference each year from member submissions, with organizers aiming for about 150 participants at each three- to four-day meeting. Past conferences have considered volcanism, the consequences of sea-level rise, climate science communication, and the causes and effects of solar minima, among a wide range of topics.

A more intimate setting for serious scientific discussions is reminiscent of the Gordon Research Conferences, the highly regarded program that strives to create an informal atmosphere where many voices can be heard. “It’s very much like that,” Lakshmi said. “The afternoons are given over to discussion groups. There’s a moderator, and it’s a free-for-all discussion. Then in the evening, there’s an informal reception plus a poster presentation where graduate students, post-docs and young scientists have a chance to present their work.”

Since embarking on a career that has led to being a professor of hydrology, water resources and climate, Lakshmi has worked to help students in their scientific journeys. “Part of the reason I enjoy being at USC so much is that I love teaching,” he said. “Hanging out with students and teaching them is such a pleasure.”

One aspect of his educational background adds to the mix there. Although he’s a professor of science, Lakshmi’s degrees are all in the discipline of engineering, beginning with a bachelor’s in civil engineering from Roorkee University, now called the Indian Institute of Technology, Roorkee.

“Engineers are a little more organization-dependent,” he said. “A lot of engineering involves creating game plans, flow charts and schedules – it’s about being organized. And I think early on I realized that was one of the things I really liked to do.”

Lakshmi’s success as a mentor is a testament to his abilities to get the right people together to solve problems. He’s graduated five doctoral and 17 master’s students since arriving at USC in 1999.

And he plans to continue organizing people to create solutions at the Chapman Conferences, listening to ideas from the more than 60,000 members of the AGU.

“It’s not about me, as chair, coming up with the program on my own,” he said.  “The goal is to get people excited to come up with interesting topics and get a discussion going. To do that you have to have the necessary skills – leadership, interpersonal skills, the ability to get along with people. I think I do a reasonably well at that, and that makes it easy for me to bring people together.”