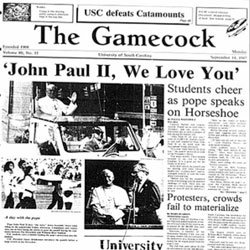 The Daily Gamecock's archives now include a searchable online database of issues dating back to 1908. This issue from 1987 commemorates the visit of Pope John Paul II to the UofSC campus.

The Gamecock editor Jeff Rogers thought he had his photographers prepared to capture a once-in-a-lifetime moment – the implosion of a downtown Columbia hotel that had been home to University of South Carolina students for years.

“We had three photographers. We had scoped out angles from various locations in the city around the building,” Rogers says, recalling the summer of 1985. “The next day, the photo editor tells me we got nothing. All three cameras had failed to capture a single usable image.”

Rogers was faced with the disappointment of having to use an image from the local newspaper or the wire service, when a student walked in offering his images.

“I told him we didn’t have any money, but we’d give him credit,” Rogers says. “Looking back at that front page now, I see the credit’s not there. It must have fallen off in paste-up.”

Now everyone can see the work of hundreds of editors and thousands of reporters and writers who turned The Gamecock into a must-read for the student population for more than 100 years. The Gamecock’s archives dating back to 1908 are now online and searchable, giving an oddly digital feel to an analog world.

“The Gamecock is used heavily by researchers and students alike because it is such a great resource on documenting what’s been going on at the university since 1908,” says Elizabeth Cassidy West, university archivist. “The keyword search capability of the new digital archive is fantastic. I’ve already been using it. I regularly get calls from faculty, students and alumni who want to know about something that happened on campus at some point in history. Now I can have an answer for them very quickly.”

That sort of ready access to information was not even a thought when Sig Huitt was the editor-in-chief in 1966.

“There was no Internet, no cell phones, no instant messaging,” said Huitt, a public relations professional who was the university’s spokesman from 1968 to 1976. “We were the students’ primary source of information.”

Huitt looks back fondly on his time at The Gamecock.

“I joined the staff the very first night I was on campus,” he says. “I was interested in journalism and had done the high school journalism route. I remember standing outside the door trying to get the nerve up to go in as a beginning freshman.

“I went in and they gave me an assignment to cover fraternity rush and I got a page one byline my first week on campus. That sort of gets you started.”

Jackie Alexander ran The Daily Gamecock for the 2007-08 academic year under the watchful eye of student media director Scott Lindenberg.

“I loved every minute of it,” Alexander says. “My time at The Daily Gamecock was so important to me that I knew when I graduated that, while I wanted a reporter, eventually I would find myself back working with student media groups.”

After three years as a newspaper reporter, Alexander joined the staff at Clemson University as associate director of student media.

Start searching past issues at The Daily Gamecock's archives page.