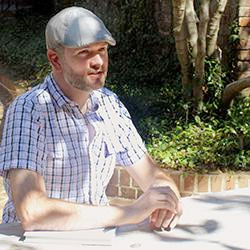 When it comes to poverty in America, Kirk Foster wants to change the conversation.

As co-author of the new book "Chasing the American Dream: Understanding What Shapes Our Fortunes," the University of South Carolina social work professor spent the past few years interviewing Americans about economic opportunity and the barriers to it. What he and fellow authors Mark Rank and Thomas Hirschl discovered contradicts many of our established notions of what it means to “make it” in America.

Instead, Foster says, people tended to define the American success story in terms of economic security. But even that concept is fluid, changing relative to a person’s background and economic status. For the CEO of a multinational corporation it meant one thing; for the first responder or the out-of-work laborer, it meant something very different.

“I spoke to a single mom living in subsidized housing, and for her, economic security simply meant providing a roof over the heads of her kids — while still being able to give 10 percent of every dollar she made back to her church,” says Foster.

While the book is built around the personal accounts of real Americans, Foster’s qualitative interviews are contextualized and supported with four decades worth of data from the Panel Study of Income Dynamics. Combined, the interviews and statistics paint a picture of an America where individualist aspirations and ideals routinely bump heads with real economic hardship.

And policymakers and academics have already taken notice. Last November, five months before the book’s March 28 publication date, lead author Mark Rank wrote a New York Times editorial stating that roughly 40 percent of Americans will experience poverty at some point between the ages of 25 and 60. Days later, the Atlantic Monthly picked up on the story, and on Dec. 4, President Barack Obama alluded to that same startling figure in a speech on economic mobility.

Foster describes that series of events as a game-changer, and an indication, he hopes, that we may start to recognize just how pervasive poverty has become in America — and how important it is to rethink the ways we address it.

“Many people in this country have this bootstrap mentality that, ‘If I just keep working harder, I will get ahead. If I take on one more job, if I mow a few yards when I’m not working one of my other two jobs, I will finally make it.’ It’s not that way for many people,” he says. “America was really built on communities working together to make change, to help people advance, to help someone when they’re down and out. I’m hoping that we can recognize that and start a different conversation.”

"Chasing the American Dream: Understanding What Shapes Our Fortunes," by Mark Rank, Thomas Hirschl and Kirk Foster will be published March 28, 2014, by Oxford University Press.