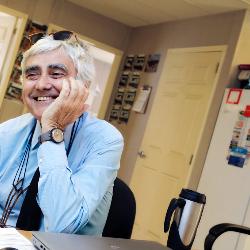 The architect of the new Darla Moore School of Business talks about his vision for the building as an international hub.

The architect for the new Darla Moore School of Business, Rafael Vinoly, was in town recently to tour the building as it nears completion. We caught up with Vinoly and talked about his vision for the building and how that is coming together.

Tell us about your vision for the building and how it is being realized.

“I think from the very beginning, the building was thought of as an anchor for the future development of the Innovista district and it really looks like such in many ways. When you visit a building like this during construction as an architect, you always have in mind a number of things, which are sort of verifications of certain ideas that you had or dimensions or proportions.

This is my second or third visit here in construction and now you can see it or at least we can see it as architects.

It is remarkable this multiplicity of journeys that the building offers through it, which clearly bring forth this notion that the Darla Moore Business School is a hub for networking internationally, that actually offers, not a stratified structure, but something much more fluid and dynamic in which people can actually interact with each other without too much of a rigid schedule.

The notion being that even in a clearly organized structure like the school has, people have the opportunity to meet with other people in a serendipitous fashion.

The presence of nature and this idea of the courtyard and the symbolic character of the glass, which is a very prominent part of the design and something that offers an opportunity for locating yourself through the building.

The vertical connectivity with the ramps and the stairs that link a multiple story building make it even more friendly for interaction and connectivity.

The other thing I think that is interesting is the relationship with the Coliseum and what it suggests that building could become in the future for the university.”

When you say it is an international hub, is that a feeling? Is it something you can design?

“It’s a very much South Carolina building. But in the times of globalization, the way you stress local characteristics with a mission of embracing a community which is international, which is global, is through the use of the spaces, which I think are very difficult to program. You cannot say this room is for that or that open space is for this other thing.

The pattern of functionality in a business school is changing very rapidly and the building offers that possibility of rearrangement of different sectors.

It has one very strong idea and that is this sort of platform with all the classrooms together, which is not only an efficient approach to the scheduling of classes, but also an opportunity because there is an independent access from the tunnel, for the rest of the university community to use the large auditorium and the small auditorium for performances and other purposes.

Since this is the first move to the new expansion of campus, to really start from this corner and offer a real possibility for other people to use it rather than creating a kind of independent territory, it was an important thing. The connection through the tunnel to the main campus is fundamental to attract other people to this particular location.”

What was the biggest challenge for you?

“It’s a very difficult thing to establish a dialogue in which you are somehow proposing forms of usage that are innovative. I think that in that regard, Darla played an enormous role in this from the very initial part of the project to the actual design. I mean it is her own vision of how the school positions itself, not only in relationship to the rest of the university, but fundamentally in the concert of the much larger universe.”

This is your first time working in South Carolina. What do you think of it?

“I think it is an extraordinary place full of history and an absolutely fundamental role in the history of the country. It is a place for an immigrant like me to recall images of the South that we all saw in very early movies and in very important literature. It is a wonderful thing. Pretty much “deep America.”

Everybody has been extraordinarily supportive, our team, the construction managers, the workers are doing an extraordinary job, too.”

This was your first tour of the building with Darla Moore. How did that go?

“She’s incredibly funny and hands-on and had a lot of very positive reactions to the complexity of seeing a building when you have to indicate what is happening in this construction site will be ‘this’ and ‘that’ and ‘the other thing.’ Darla has always been this fundamental force in American business and America culture; that makes her so unique. And I think you all should be extremely happy that she is part of the university and the community at large, too.”

Did you see anything today that turned out better than you thought it would?

“All the time. Whatever architects pretend, we’re the first to be surprised.”