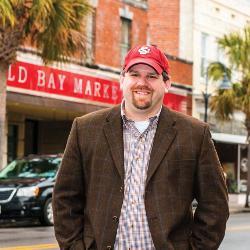 Ben Muldrow, a 2000 advertising graduate, has a knack for knowing what makes a town tick.

Let your parking meter expire in most downtown shopping districts, and you’ll likely find the windshield bejeweled with a pricey little token from the parking patrol.

But town officials in State College, Pa., decided on a different approach. Instead of pinning parking tickets on out-of-town cars, the parking cops post friendly notes that suggest better options for parking on future trips and thank the cars’ occupants for visiting.

“Imagine the shopper’s reaction,” says Ben Muldrow, a marketing executive who has coached hundreds of towns across the country on how to put their best foot forward. “‘Wow, I’m going to tell my friends what a nice place this is — they not only didn’t give me a parking ticket; they thanked me  for coming!’”

Muldrow shared that anecdote with officials in Camden, S.C., who adopted a similar tack. Out-of-state cars there get a note signed by the mayor that asks for feedback about their downtown shopping experience.

“We get to see ideas that work and those that don’t and share the results with other communities,” said Muldrow, a 2000 USC graduate with a degree in advertising. He’s a partner at Arnett Muldrow & Associates, a Greenville-based urban planning firm where he strategizes on community marketing and branding functions.

Since joining the company, Muldrow has trekked to 330 communities in 30 states. The place names change, but the situations often are similar — a town wants to better promote itself to outsiders or attract more weekend shoppers or shake off some negative perception that’s no longer valid.

“It’s easier to work with communities that realize they’re dealing with perception issues rather than with communities that are on a decline but won’t admit it,” Muldrow said. “The biggest challenges are when one organization — maybe it’s the town’s Chamber of Commerce or visitors’ bureau — knows what’s going on, but we have to convince the community’s other organizations to get on board.

“Corporations have made huge strides in understanding how consumers can relate to their products, but that’s been a huge task for communities to understand.”

Muldrow got his first taste of marketing and branding at Carolina when he was president of Carolina Productions, the student group that recruits speakers and entertainers to campus. He got another dose as graphics editor for the Daily Gamecock and as chief of staff in student government.

“I was scared to death I would be just a number at USC,” he said. “But before I knew it, I was participating in the Columbia Ad Club and had a front-row seat to the relationship between USC and the City of Columbia. That’s what got me interested in understanding the psyche of a city.”

In the years since, Muldrow has acquired a pretty good grasp on what makes American towns tick. He knows what they want to achieve, and he’s become adept at quickly sizing up their strengths and weaknesses. His firm prides itself on doing their work in two or three days and  at a fraction of the price tag of other large  branding firms.

“I tell our clients that we bring the expertise from working in hundreds of communities and can blend it with their expertise of the place they call home,” Muldrow said. “As outsiders we have the ability to bring an unbiased perspective to a community. We can appreciate a community for its beauty instead of getting caught up in any political and historical baggage.

“We really try to fall in love with each community. I try to convince myself to move my family to your town, and that comes through in our recommendations.”

Queen of the Sea Islands

Sandwiched between the tourism meccas of Savannah, Ga., and Charleston, Beaufort, S.C., struggled a bit to define itself as a destination in its own right. With a rich history, Atlantic waterfront and lively arts scene, Beaufort has always had the right assets — its promoters just needed help connecting all of the dots.

“We needed something to claim our identity. Arnett Muldrow did a three-day meeting with community leaders, the public, business owners and young professionals and created this brand for us,” said LaNelle Fabian, a 1995 UofSC graduate who heads the Main Street Beaufort Association. “It was amazing what they accomplished in such a short time.”

Ben Muldrow has worked with about 50 towns and communities in South Carolina, helping them, as he puts it, “stitch together a narrative of what they have to offer.” In Beaufort, he was immediately struck by the town’s historical context.

“So many towns in the South don’t have those old buildings and stories anymore. Beaufort has the vibe of being a truly historic place but also a very comfortable place to live and visit — the feeling so many communities are trying to achieve.”

“They ended up taking us back to an identity we used to have: Queen of the Sea Islands. All of our people were happy about that,” Fabian said. “They took our historic downtown logo and emphasized the ‘Established 1711’ for history buffs and ‘Queen of the Sea Islands’ for others. They also laid out a plan for improving our wayfinding signage and gave us some great suggestions for ads.”

One tagline suggestion that Beaufort turned into a tourism ad: “Before Savannah was founded, we were old enough to drink.”

Ben Muldrow is one of several alumni featured in the spring 2014 edition of Carolinian, the university's award-winning magazine. Join the My Carolina Alumni Association or support the university to become a subscriber.