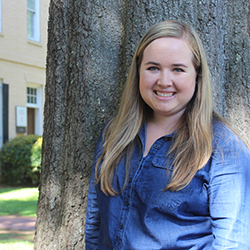 Caroline Hendricks earned one of the highest honors a senior can achieve at South Carolina, the Steven N. Swanger award. The award is given annually for exemplary leadership and for making significant contributions to the university.

Caroline Hendricks made her way to the University of South Carolina four years ago, and she's done so well that she earned the Steven N. Swanger Award, one of the highest honors a senior can receive.

But Carolina wasn't where she first intended to spend her undergraduate career. It wasn't even the kind of college she wanted to attend.

But scholarships and some further reflection swayed her decision. "And now, I don't even know why I was looking at private colleges," she says. "I've really enjoyed my time here at Carolina — it's been awesome."

Hendricks found a perfect academic fit among the wide range of courses of study. A double major in European studies and biology, she will receive both a B.A. and a B.S. at commencement.

She's had a longstanding interest in European history, but given her goal of becoming a physician, pursuing it as a major might seem unusual. But Hendricks sees it otherwise.

"One thing that I've taken from being a European studies major is that studying history is studying the ways people think and act," she says. "Sometimes as a science major you might get bogged down in the details of cell chemistry and cell biology to where you lose the focus on people, which is definitely a huge part of medical practice."

The reading and writing assignments in her humanities courses will also serve her well in medicine.

"In pretty much all of my history classes, I've had either a long-term research paper or short essays along the way, and they've really helped me to synthesize different material, become a better writer and develop my critical thinking," she says. "I think that will definitely help me in medical practice. It's applicable to any career, really, but I think it will be especially helpful as a physician not to come just from a science background."

The medical school in Charleston agrees. Hendricks was admitted to the Medical University of South Carolina and plans to pursue a career in pediatrics there beginning this fall.

Hendricks took particular interest in one program here, USC Connect, which is designed to help students find learning and leadership experiences outside of the classroom.

"My sophomore year, USC Connect started reaching out to get students involved in its development," she says. "They wanted to have student input, so that it's not just people who work here talking about it. I got really excited about it because it was great to help encourage other students to engage in experiences beyond the classroom, but there's also this component of reflecting on those experiences."

She's developed that as a habit now.

"It has helped me a lot as I went into medical school interviews, to have already reflected on what aspects of my European history major are going to help me as a physician," she says. "And then how my leadership experiences, my study abroad experiences, how all of that helps me grow as a person and can help me in my future career path."

Hendricks has found numerous outlets at Carolina for her academic and social enthusiasm, from being one of the founding members of the Alpha Gamma Delta sorority, to serving as a peer reviewer for an undergraduate-run neuroscience journal (IMPULSE), to studies abroad in England, Ireland and Italy.

"It's great to have so many different things to get involved with, and having a lot of different friend groups to go along with that," she says. "That way, you're not stuck with just the same five people all the time, or the same five people in every leadership role as can sometimes happen on a smaller campus.

"It's been nice to still meet new people my senior year. It's not like I know everybody and everybody knows me. That's been great."