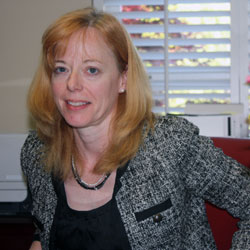 Leslie Brunelli, University of South Carolina chief financial officer, earned her PMBA from the Darla Moore School of Business in 1996.

Leslie Brunelli knew fairly soon after graduating from the University of South Carolina in 1991 with a bachelor’s degree in philosophy that she might need to return to school to boost her career opportunities.

“Who’s going to hire someone with a bachelor’s degree in philosophy to do their books?” she says from her office in the Osborne Administration Building, where she is the university’s chief financial officer. “When I graduated here, I went to work for Colonial Life in a customer service and claims position and realized the only way I was going to be able to do anything in a business capacity was to go to business school.”

She returned to Carolina as a part-time student in the university’s Professional Master’s of Business Administration program, finishing in 1996 and starting a job as a senior accountant at the Technical College of the Lowcountry in Beaufort.

By the time Brunelli started classes, the PMBA was already well established in South Carolina, having been launched in 1970 and originally called MBA-ETV. It was designed to create a master’s degree program for working business executives. The ETV portion was how the program reached throughout the state via educational television.

“Many of those graduates have stayed in South Carolina and have leadership roles in the state’s major businesses and institutions, such as Blue Cross and Blue Shield of South Carolina, Bank of America, Boeing, Michelin and SCANA Corp.,” said Tim Carroll, director of the PMBA program.

Soon after Brunelli started her post-PMBA career, she was hired to help take USC Beaufort from a two-year regional campus to a four-year, degree-granting institution.

“It was tough,” she says. “It had not been done any time recently. There just wasn’t a roadmap for it.

“It’s good and bad. You don’t have to follow anything, you kind of set your own course. But there’s also not the comfort of knowing Step 1, Step 2, Step 3. There were no steps; you had to figure it out on your own.”

She came to the Columbia campus in 2004 and has served as budget director and now is vice president for finance and chief financial officer. In that position, she has to look at all the numbers that make up the university’s balance sheet and make decisions on what programs and proposals can be supported by those numbers.

“You have so many levers to pull now, you have to know, if I do this, what is the effect over here,” she says. “When you grow the size of the class, which we have done over the past several years very intentionally, it has those repercussions down the road: Do we have housing space? Do we have the classroom space?

“There will never be enough money to do everything that we could or should do. It’s always about what are the priorities.”

Making those decisions, she says, is the perfect combination of both of her Carolina degrees.

Most students in the PMBA program come from a nonbusiness background, with only about a third having business degrees. The largest percentage (44) have degrees in engineering or science and are looking for a business degree to move their careers forward. The students bring more real-world experience to the classroom — an average of nine years in their chosen fields — than students in traditional MBA programs. Classes are held in the evenings throughout the state and in Charlotte, N.C., via telepresence technology that allows all participants to interact with each other in real time. About one Saturday a month, students come to Columbia for daylong classes and to work on projects together. Visit the Darla Moore School of Business PMBA program website to learn how you can earn an MBA without interrupting your career.