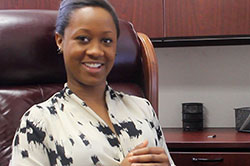 Lindsay Richardson came to the University of South Carolina because it felt like home. Now, as the 2014-15 student body president, she hopes to leave a legacy that empowers all students to be leaders.

Richardson entered college with high expectations and even higher goals. She wanted to challenge herself, branch out and take advantage of all the opportunities that drew her to the university.

Her lack of free time suggests that she has met her goals. The 21-year old junior is working on a triple-major in political science, marketing and management. With what downtime she has Richardson studies for the LSAT, with dreams of practicing property or business law and working in public advocacy.

Now representing the over 30,000 students on the Columbia campus has added more to Richardson’s plate.

Her duties as president include making sure Student Government is running and helping its members become strong leaders. She represents and advocates for students at all University of South Carolina campuses around the state in meetings with university trustees, legislators and other state officials.

“Each day is very different from the next,” says Richardson. “One day, you can be booked straight with meetings and the next day, you can kind of have an open schedule but then get called into something out of the blue. Your life is literally not your own.”

Richardson says she got her start in Student Government is order to solve a problem.

“Freshman year, I was living in Sims. After listening to complaints my friends had about our dorm, I went to the RHA (residential house association). I was redirected to SGA,” she says. “I just started out (in SGA) wanting to be a voice for the people I knew and loved.”

Three years later, she decided to run for the top office and hopes to leave the campus she loves better than it was when she arrived.

“I hope to leave the legacy that everyone is a leader and everyone can choose to leave an impact unimaginable.”

Richardson admits that being president isn’t as easy as she expected. Being the final say on so many issues had tested her. Choosing ultimately what’s best for the organization, and university by extension, however, remains Richardson’s top priority.

“That’s the first day that everyone comes together on one day, so the energy on campus is just unbelievable,” she says. “Just the pride that goes on that day really shows how spirited our university is.”

Richardson also serves as a university ambassador, a resident mentor in Patterson Hall, a member of Omicron Delta Kappa, and of Mortar Board.

Richardson wants to help the university grow and to create more services that can improve students’ daily lives, such as an umbrella checkout program for those caught unprepared on a rainy day.

In her downtime, Richardson makes a point of keeping her weekly appointment with friends, discovering new restaurants in town. And she always finds time for her family, calling on her parents for leadership and her sisters for compassion.