Becoming a leader, getting ahead 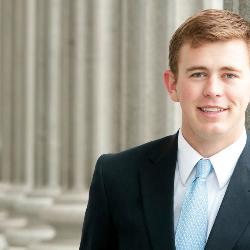 Senior Thomas Landzert has made the most of his time at Carolina, from multiple internships in politics to taking the helm of his fraternity. He has learned, in and out of the classroom, what it means to be a leader.

A few years ago Thomas Landzert decided to step up and become a leader, something he wasn’t preparing to do as a sophomore. But when his fraternity needed him, Landzert took over and with a handful of dedicated brothers helped rebuild the UofSC chapter of Lambda Chi Alpha to one focused on brotherhood and service.

It is just one example of the leadership opportunities Landzert pursued as a political science major. In May, he will be among the first crop of students to graduate with leadership distinction.

Landzert has also had plenty of experience with leadership outside the classroom, spending a semester in Washington, D.C., as a part of the Washington Semester Internship Program where he interned with U.S. Rep. Mick Mulvaney of South Carolina.

But that wasn’t enough for Landzert. The North Carolina native returned to his home state to intern with Gov. Pat McCrory in the Charlotte office. To round out his political experience, Landzert worked with a fundraiser in Washington for U.S. Rep. Patrick McHenry of North Carolina.

“I got to see a different side of politics,” Landzert says.

Through all his experiences, Landzert says he has learned that he wants to stay on the local and state level of politics where he could see more benefits from his work.

“You see the people you’re helping out and how it affects them,” he says. “You’ve got your ear to the door of the community. You can really make a difference there.”

For Landzert, his out-of-classroom experiences allowed him to see politics at work, handling constituents and being a part of the everyday governmental system. In the classroom, he enjoyed learning the theories behind what he saw.

“The internship was day-to-day whereas political science was more about year-to-year and different trends and patterns throughout time,” he says. “What I’ve learned in the classroom has helped me discover more about what I saw in my internship. It helped me understand why the world is the way it is.”

Although he never had aspirations to be a leader or president of the fraternity, he says it has been one of the greatest rewards at Carolina. Now he feels like he’s prepared for whatever comes next.

As part of the Graduate with Leadership Distinction program, Landzert and others will make presentations about their leadership experiences at the university’s annual showcase of undergraduate scholarship, Discovery Day. The event begins at 8:30 a.m., Friday (April 25) at the Russell House and is free and open to the public.