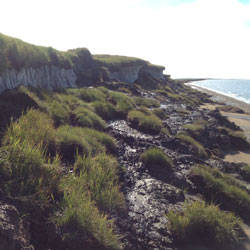 A trio of UofSC researchers contributed to a groundbreaking climate change report by the U.N. Intergovernmental Panel on Climate Change.

After four years of long hours in the office, thousands of scientific sources, and thousands of miles of travel, three professors in the University of South Carolina’s geography department can finally take a breather.

In addition to teaching classes, Kirstin Dow, Edward Carr and Susan Cutter devoted themselves to contributing to a groundbreaking climate change report by the U.N. Intergovernmental Panel on Climate Change. Their participation on the panel’s Working Group II, which studied the impacts, adaptation and vulnerability of climate change, gave the department the highest percentage of representation of any university department in the world.

“It was an amazing experience to work with a group of scientists who care about something so deeply,” said Dow, a lead author on the report who worked with hundreds of researchers from 70 countries.

Dow contributed to the report by co-authoring a chapter about the opportunities, constraints and limits to adapting to climate change and the condensed Summary for Policy Makers. She participated in almost 150 Web-based meetings and attended the formal U.N. governmental approval session in Yokohama, Japan, at the end of March. Her current research at the university focuses on understanding the needs of decision-makers in the Carolinas and how they frame problems. She also seeks to provide them with scientific understanding and information.

Dow says the department’s deep bench of climate experts is getting global recognition.

“It’s the interdisciplinary nature of what we’re doing that makes us a strong department,” Dow says. “We try to integrate the understanding of climate science with natural science in an effort to inform adaption and decision-making.”

Cutter says the department’s 20-year history of involvement in the line of work sets it apart from other universities.

“We’re good on social science and good on the policy area,” Cutter says. “Our work is focused on the human impacts of climate change and how societies adapt and respond to change.”

Carr also played a vital role in the completion of the report, serving as a review editor. He was responsible for sifting through more than 600 comments and then consulting with the lead authors to make sure they appropriately addressed every comment as they revised their chapter. Although the task was daunting, Carr’s extensive experience studying in rural Africa prepared him for the rigorous review sessions.

"Fifteen years of experience studying the impact of climate variability and change on the lives of rural farmers in sub-Saharan Africa brought some urgency to my work as a review editor and the goal of producing the best report possible,” Carr says.

Professor Gregory Carbone and students are currently working on a new project, in which they will collaborate on creating the first low-impact development manual in the U.S. to include climate change.

“We’re passionate about sharing ideas about how to develop laws and institutions regarding the potential impacts of climate change,” Dow says. “It’s exciting to address the different needs.”