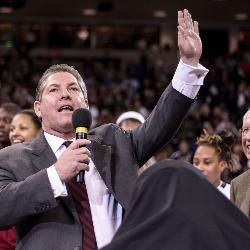 Ray Tanner enjoyed unprecedented success as the Gamecock head baseball coach. This past year — his second as athletic director — saw even more success.

Ray Tanner enjoyed unprecedented success as the Gamecock head baseball coach and this past year — his second as athletic director — saw even more success. The football team has won 11 games three years in a row, the women's basketball team made the Sweet 16 in the NCAA tournament and the equestrian team won its second-straight Southeastern Conference title and came in second in the national championship. We caught up with Tanner to ask about the year that was 2013-14.

You've been at Carolina a long time, seen some highs and lows for all our teams. Was 2013-14 the best year ever?

"I feel like we have had a consistent run the last four or five years. We've had a lot of outstanding moments as it relates to athletic success and the entire university, I think our brand is stronger that it ever has been as a university. Athletics is a part of that. It's not the whole part. I think Dr. Pastides' impact as president has been felt throughout the country and has impacted our university in a positive way.

How do you maintain that momentum going forward?

Do you think your coaching background helps out with that?

"I do think my background helps out in a big way. I have been around student athletes my entire life. I understand coaching. I understand resources. I understand the fan base; I understand our Gamecock Club. I think it's very important that the culture and the mindset are at a high level all the time."

Is there a single moment this year that really stands out for you?

"You know we beat Clemson again in football and that's five in a row. It's a rivalry and to be able to win five years in a row is really an incredible feat, and there's excitement that's generated with your fan base when you're doing something like that. Then Coach Staley's SEC conference clinching championship game against Georgia at Colonial Life Arena. The post-game celebration, there were 12,500 people there to come watch her and her young women clinch that SEC championship. That was a moment, I stood up at the end of the game and went 'Wow, this is incredible!'

What do you think has been the key factor to this high level of achievement?

"I think it's all about people and when you say people, you're talking about coaches and student athletes and your fan base, your donors, your Gamecock Club members, your boosters. I go back to when we were not very successful in football; we had pretty good attendance. We had the foundation in place from the donor base, fan interest to do something special. We increased our resources and now the mindset and the culture among our student athletes is 'We're among the best.' It's not arrogance; it's not ego; it's just culture and mindset."

How does athletics involve Carolina employees from the academic and administrative-support side of the university in what it does?

"It's not about the athletic department, it's about the University of South Carolina and we all share in each success that we have. When we have success academically or we have a professor get honored, we take great joy in that. We want the entire university to feel good about what we're doing in athletics. It's not just about athletics, it's about the entire university. I hope that all of our faculty and staff feel that way. We've had 14 semesters in a row where athletes had at least a 3.0 (GPA). As much as we get caught up in winning games and the excitement of competition, 99 percent of these athletes are going to be professionals in something other than the sports they play. While we have the opportunity to compete in sports, the ultimate goal is acquiring a degree and accomplishing that 'student' part of being a 'student athlete.' "

What is the biggest difference in this job and coaching a team?

"When I coached a team, it was like I had a small business. It's like your own unit. And now, there are 21 units because we have 21 sports. I still have the same approach. I don't step on the coaches' toes about these things, but my mentality is still the same: to put our student athletes in a position to be successful, academically and athletically, without compromise. As I wake up every day, it's the opportunity to do my part in helping us sustain success and helping us to grow as much as we can."

"There aren't any typical days. They're very busy, but they're very exciting. I love coming to work. And I'm sure a lot of people will say, 'I bet you do, you're involved in sports at the University of South Carolina.' Whether today I get a chance to go to a sand volleyball game or I was at softball last night, it's always exciting. In the professional world, you have a choice to make on how you approach each day. Well it's easy for me — this is a love, this is a passion to be involved in sports."

Since you don't have an offseason, how do you make time for your family (wife, Karen ('87 physical education), and children, Gracie, Maggie and Luke)?

"They participate in a lot of activities. We were in the bowl game, the Capital One Bowl. That's also Disney World. They come to softball games and baseball games, but they love sports, too. My wife is in sports medicine. She works over at Columbia College. She understands it, she loves the university, she graduated here. Our family time very often is spent at Gamecock events. And that's not a very bad way to go."