Research keeps many eyes on the coastline 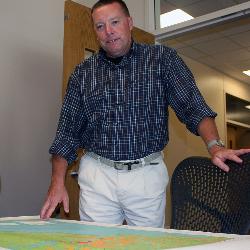 Dwayne Porter is director of the Geographic Information Processing Laboratory at the Baruch Institute. His lab takes in and processes information from hundreds of points around the U.S.

About an hour into the storm, folks noticed water coming into the building — not rainwater but tidal surge that accompanied the Category 4 storm.

Residents who were advised to gather at the high school for safety climbed on top of anything they could find and even found their way into the attic space to get themselves and their children above the rising floodwaters. Miraculously, everyone survived.

"That could have been the tragedy of the storm," says Dwayne Porter, director of the Geographic Information Processing Laboratory at the Baruch Institute. "The lesson learned from Hugo was to scrutinize our data. The posted elevation for the high school was overstated. Combine that with a larger than expected storm surge and you had the recipe for disaster."

Quality data is what Porter does. His laboratory takes in and processes information from hundreds of points around the U.S. to create knowledge people can use for critical decisions. The data could be used by a family from Ohio visiting S.C.'s beaches to decide whether to go swimming that day or to opt for miniature golf instead. His data also can help local officials determine the true high point in a coastal town so residents can be safe during a major event, such as a hurricane.

As a result of the near-disaster of Hurricane Hugo, McClellanville no longer uses any location east of the beach highway, U.S. 17, as a shelter.

As the Atlantic hurricane season gets underway this month, Porter and his team continue to provide accurate data to all coastal points around the U.S. as well as to South Carolinians.

"In South Carolina, we are literally in a living laboratory," Porter says. "We have a responsibility to the people of the state to address those issues that affect our health and well-being."

That includes helping the state prepare for and recover from hurricanes, which tend to occur during the warm-water months in the Atlantic Ocean from June 1 to Nov. 30.

"We haven't had a catastrophic storm since Hugo in 1989," Porter says. "But memories are short, and we have forgotten a lot of the lessons we learned."

The biggest lesson forgotten is the inherent danger of building so close to the water. The damage estimate from Hurricane Hugo ranged up to $6 billion as the storm made landfall between Charleston and McClellanville, raced across the state and into North Carolina and the Ohio Valley before turning back to the east. It was still a significant storm system when it entered Canada.

Today, because of even more development along the coast, the South Carolina Insurance News Service estimates the damage in the state from a similar storm would be about $10 billion.

"We have continued coastal development almost unabated," says Porter, who earned his master's ('88) and doctorate ('95) at Carolina. Porter worked for the state coastal management and natural resources departments before returning to the university as an associate professor in environmental health sciences in the Arnold School of Public Health and director of the information processing lab at Baruch.

Porter's research looks at the health of the coast and makes recommendations for improving management of those resources.

"The coastal environment, the marshes and estuaries, are very resilient, they can rebound and recover from these types of storms," he says. "The real damage is from what people do."

Protecting the coast and the people who use it

What people do tends to pollute the water, especially that brackish water between the state's rivers and the ocean that supports so much life, from juvenile shrimp to the people who eat it.

Knowing when it's safe to swim or harvest shellfish is part of the monitoring provided by Southeastern Coastal Ocean Observing Regional Association. The data is aggregated by the university and shared with anyone who relies on coastal waters.

"It doesn't help our tourism industry if visitors sees swim warnings the whole time they are here," Porter says. "But it also doesn't help if they have to make a trip to the doctor's office with gastrointestinal distress."

Porter says state officials are always trying to strike a balance between free access and use of the beach and other coastal assets and protecting them. For every overdeveloped area, there is a protected area like the 380,000-acre ACE Basin between Charleston and Beaufort.

"I don't think we give the state departments of Natural Resources and Health and Environmental Control the credit they deserve for their efforts to preserve and protect our coastline," Porter says. "Of course, we would all like to see us do more and be better, but the truth is, South Carolina and South Carolinians have done a good job of protecting and preserving the coast."

The Southeastern Coastal Ocean Observing Regional Association provides beach-goers with real-time data on water quality. Visit How's the Beach? for more information. Dwayne Porter is just one of more than a dozen faculty members and researchers with expertise about hurricanes, from the science of how they form to their impact on the state's tourism industry. See a complete list of hurricane experts.