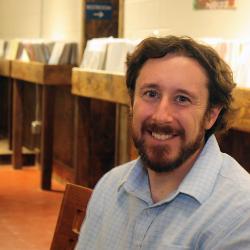 Portuguese program director at UofSC, Andrew Rajca is researching how South Americans tell the stories of past dictatorships through art, music, film and literature.

If Andrew Rajca is speaking a mile a minute, you know you have found a subject he is passionate about. Typically, it has something to do with Latin America, the languages, the culture and the art.

Rajca teaches Spanish and Portuguese at the University of South Carolina and is director of the Portuguese program, reviving it as a minor.

But he also is intensely involved in research, working on a book about the way South Americans remember the violence of dictatorships of the 1970s and '80s in their art, their films, their music and their writings and how those past events affect their thinking today.

Rajca was just a child when most of those dictatorships came to an end in early 1980s in Brazil, Argentina, Uruguay. But he is very interested in the way those times are portrayed in art and thinking in those countries today and how that translates into actions.

His research informs his teaching as he brings these ideas to the classroom.

"I demand a lot from my students, I challenge them to read a lot of material that may be uncomfortable, but is important to get them thinking critically about these issues," Rajca says. "We want them to see how these academic concepts affect real life."

Rajca, was born and raised in Brighton, Mich., and is the grandson of Irish immigrants on his mother's side.

"I always had an aptitude for languages," he says. "And I always knew I wanted to be a teacher."

Following graduation from Michigan State with a degree in Spanish, Rajca stuck out his thumb and hitchhiked his way through South America.

"It was the first time I had been exposed to that kind of poverty," he says. Since then, he has spent a great deal of time living, working and doing research in Brazil, Uruguay, and Argentina.

Back in the States, he earned a master's degree in Latin American Studies from the University of Arizona then worked for a Washington, D.C., nonprofit organization helping native Spanish-speakers and other immigrants gain access to education. He then went back to Arizona, where he earned a Ph.D. in Spanish and Portuguese.

One of his first goals was to re-establish the Portuguese language program so students could earn a minor in that language.

"We wanted to jump-start the program by offering a mid-level Portuguese course for native Spanish-speakers," he said. "The two languages are so closely related, that it is easy to transition from one to the other."

The course was also open to students at Carolina who had completed 300-level Spanish courses. That led to a critical mass of students who are prepared for higher-level courses, including Brazilian literature classes.

"The key for restarting the minor was to get students to that 300-level in Portuguese," Rajca says. "This fall, we will have the largest number of students taking Portuguese ever at the University of South Carolina."

Part of the growing interest in the language is because of the increased profile of Brazil, the world's largest Portuguese-speaking nation, with the attention brought by this year's World Cup and the 2016 Olympic Games.

"I get a lot of business students who take it for their language requirement," he says. "We also teach them something about the culture as well as giving them skills they can take with them as business professionals."

Some of Andrew Rajca's research for his upcoming book was supported by an ASPIRE grant. Visit Carolina's Promise to learn how you can help support this program offered by the university's Office of Research.