Science education: under the microscope 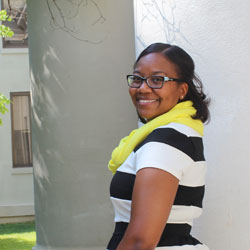 When Brittany Garvin pulled out the scissors and the hair relaxer, her students initially thought she'd lost her mind. But all Garvin really wanted was a strand or two of human hair.

A doctoral candidate in science education at the University of South Carolina and USC Upstate alumna with a bachelor's degree in biology, Garvin has also spent eight years working with marginalized and low-income teens through Upward Bound programs at Benedict College, Midlands Technical College and Carolina. In the process, she has learned a great deal about what works and what doesn't in the science classroom, particularly in predominantly African-American schools.

And this is where the scissors come in. And the hair. And the relaxer.

"When a black person puts a relaxer in their hair, it's not the same as when a white person gets a perm," Garvin explains. "It's a different chemical, sodium hydroxide, and that chemical reacts with the hair in a very different way."

Looking at their own hair through a microscope after dousing it with sodium hydroxide, a very powerful base, Garvin's Upward Bound students were able to see chemistry in action, for better and worse. In the process, they had fun conducting a science experiment that's relevant to their own lives.

"They'd say, 'Oh gosh, this chemical really does straighten the hair,' which is what it's supposed to do," says Garvin. "But also, if you leave it on too long, it will cause chemical burns and literally start to disintegrate the hair."

Of course, the hair was really just the starting point, a way to capture her students' attention before she took them further down the DNA chain.

"We talked about the structure of hair and the different proteins, but my real point was to try to get students interested in genetics," she says. "From there, we segued into sickle cell anemia and how it originated with malaria resistance. A lot of my students are carriers for sickle cell, but they don't always understand that although they might not present the disease, they can still have sickle-shaped red blood cells in their body."

In education circles, Garvin's particular brand of hands-on teaching is known as culturally responsive education — in other words, teaching that's tailored to a particular group's distinct interests or cultural background.

Rethinking our overall approach to the curriculum is important, according to Garvin, especially if we want to promote interest in the so-called STEM fields of science, technology, engineering and mathematics.

"We're moving toward a more STEM-driven economy, but unfortunately we still don't have a lot of diversity in the STEM fields," she says. "The pipeline has been leaking and we need to think about ways to fix that leak. You do that by providing more opportunities in our K-12 schools."

Despite a lifelong interest in science, Garvin herself nearly leaked from the pipeline. High school classes built around lectures and worksheets weren't just uninspiring, they were inadequate. Now, she does everything in her power to make sure the middle school and high school students in her classes are prepared for college.

"I can relate to these students because I didn't have the best science experiences at all when I was in high school," says Garvin. "We didn't do any hands-on experiments. We read the textbook and the teacher lectured. So to be able to provide students hands-on learning opportunities and to make science relevant to their lives isn't even a job to me. It's just awesome."