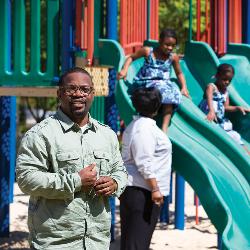 Patrick Patterson is all about keeping fathers present in their families' lives.

You could divide Patrick Patterson's life into two parts — when his dad was still at home and after his dad left. It would be simplistic, though, to say the first part was good, the second part was bad and leave it at that because Patterson has written another chapter — one of redemption and purpose and reconciliation.

But it's true that when his dad fell into the abyss of substance abuse, separated from his wife and abandoned his family, things began to fall apart. Patterson's grades plummeted, and things nearly hit rock bottom one afternoon in his senior year of high school when a guy Patterson hadn't seen in years showed up at a basketball court where Patterson and his friends were playing. Three cars screeched up to the curb behind him.

"Men get out of the cars with pistols, and they see us and think we're all together with this kid I knew in elementary school. They're after him, and they start chasing all of us, shooting, and I start running for my life," Patterson says, his voice tense with the vivid memory. "I hear the bullets whizzing past me as I'm being chased."

He dodged death that afternoon, but Patterson couldn't outrun what his life had become: an uncertain future with no father to guide him.

"That's the age when you're trying to figure out who you are, what you are. My dad was gone, but I knew that afternoon there had to be something better for me," he says.

Patterson managed to graduate high school and enrolled at a community college where he got back on track academically. A year later, he got a big break when Benedict College, located near the housing projects where he grew up, offered him a full scholarship as part of an initiative for African-American students from deprived neighborhoods. He majored in social work, focusing his studies as much as possible on the role of fatherhood.

Patterson's good fortune got even better when the University of South Carolina offered him a full-ride slot for a joint master's of social work/master's of public health degree program. He graduated from Carolina in 2000 with high honors.

"I'm very clear about God's influence on my life — I shouldn't have had any of these scholarships but am clear about where they came from," he says, crediting prayer and support from his wife, mother and family. He also credits the work ethic his father had modeled in the early years of their family.

After graduating from Carolina, Patterson became manager of a statewide fatherhood initiative funded by the Sisters of Charity Foundation. "I was being paid to promote the most important thing to me — preventing the pain that I had felt as a teenager," he says.

About 37 percent of families nationwide are raising children where the father is not present in the home, a level that climbs to 70 percent among African-Americans. "Research and life have shown me that with boys, disruptive behavior goes up when Dad isn't around, and academic achievement goes down in many instances," he says. "With girls in fatherless homes, they often start dating older men in pursuit of a father's love."

Two years after he began work with the S.C. fatherhood initiative, Patterson was invited to a political forum where he met with then-President George W. Bush about his work. The president gave him contact names in Washington; later that year, Patterson and his wife were packing their bags for Philadelphia and a new job overseeing fatherhood programs at the regional level.

Now a father of two elementary school-age girls, he is a senior manager at ICF International where he manages President Obama's National Responsible Fatherhood Clearinghouse (fatherhood.gov). He conducts fatherhood trainings and consults with communities and agencies across the country and around the world, encouraging fathers to be present and constructively involved in the lives of their children and families.

"My passion has taken me to more than 40 states, Mexico, Mongolia and throughout the Caribbean. In my travels, I've learned that the issues are the same everywhere when a father is not present," Patterson says. "Children do better when they can experience the love and care of both Mom and Dad, regardless of their relationship status. I don't just have research to support this. I have personal experience."