Stemming the tide of cancer 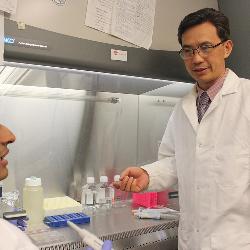 Curing cancer, not just putting a patient in remission, is what Hexin Chen and other researchers are trying to make possible with the new cancer stem cell approach to oncology.

Like everyone striving to bring an end to cancer, Hexin Chen knows the difficult history of the fight against the disease.

"In 1971, president Nixon declared war on cancer. He said, 'we should be able to cure cancer in five years,'" says Chen, an assistant professor in the department of biological sciences. But a cure didn't arrive in time for the nation's bicentennial in 1976. Nor has it since then.

That's not to say that there hasn't been progress. "Over the past 50 years, the survival rate for cancer has improved quite a bit," Chen says. "But at the same time, the death rate has remained almost the same."

The observation isn't contradictory; it reflects the success made in treating cancer without curing it. People who get cancer now live much longer thanks to early diagnosis, but they often die from its return.

Chen is one of the nation's leaders in a new research approach that holds promise for a true cure for the disease. The approach involves a rare population of tumor cells, the cancer stem cells, which are believed to be responsible for a tumor getting started and spreading. The cancer stem cells are very different in one respect from other cancer cells: they proliferate slowly compared to the vast majority of tumor cells.

Chemotherapy, a mainstay of current cancer treatment, is targeted at the rapidly growing cells that make up the bulk of a tumor, Chen says. Researchers in the field liken this kind of treatment to trying to weed a lawn with a mower: the lawn may look better for some time, but the weeds just keep coming back.

"All current anticancer drugs are designed to kill highly proliferating cells, and they are very effective," Chen says. "But the root is still there. So if you stop treatment, the cancer can grow back again."

Another challenge is that there are no universal biomarkers available that distinguish cancer stem cells from different kinds of tumors. Chen's research includes developing methods to identify and isolate the cancer stem cells, and in the mouse model his team uses, they've found two biomarkers that uniquely identify them.

His team has forged two important collaborations at the university. With Xian Wang in the department of chemistry and biochemistry, they have developed a three-dimensional culture model to enrich the cancer stem cell population. And with Xinfeng Liu of the department of mathematics, they have created a mathematical model to simulate and predict how a tumor will respond to drug treatment.

One major reason that Chen came to Carolina after completing his postdoctoral appointment at Johns Hopkins was the Center for Colon Cancer Research.

"We have all of these people from across campus working on cancer together. I think it's a very unique environment to collaborate with different people in different fields," Chen says. "The environment is excellent here. At Johns Hopkins, in terms of equipment or facilities there might be an advantage in terms of quantity, but in terms of quality, there is no difference."