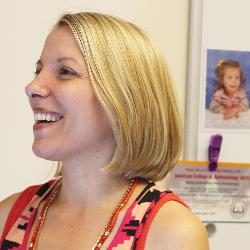 Just a year and a half after arriving at the University of South Carolina, Jan Eberth has already found success in bringing attention to places where health care disparities can be the greatest.

This year, for example, the assistant professor in the Arnold School of Public Health was first author on a paper published in the Journal of Clinical Oncology showing how important geographic location can be in affecting the quality of care a patient receives in the diagnosis and treatment of breast cancer. Differences in care continue to persist even after the medical profession as a whole came to an agreement about what constitutes  optimal treatment.

A needle biopsy is a minimally invasive means of removing tissue for analysis. With just a topical anesthetic, a health care practitioner can remove a core sample of the abnormality for biopsy.

"The tissue can be sent to pathology to see whether that particular tissue is cancerous or not. Then, if it's cancerous they can take you to a surgeon who does the full surgery and makes sure to take it all out," Eberth says. "So that's the ideal situation."

Using Medicare data from women undergoing breast cancer treatment from 2003 through 2007, Eberth and her team showed that physicians began to adopt the recommendations. From 2003 to 2007, the rate of needle biopsy did increase, from 61 percent up to 77 percent.

"So it's going in the right direction," Eberth says. "That's great progress, although it's still not in the 90s, which is where agencies say it should be."

But by using Geographical Information Sciences (GIS) tools, the team highlighted a lot of bad news that was specific to location.

"If you look at the map, you can see some striking differences by geographic region, even within our state," Eberth says. "Nationally, some places are as low as 24 percent. Some places are above 95 percent, doing even better than what would be expected."

By looking more closely at the numbers, they showed that the surgeon involved in the case was predictive of whether the standard of care, a needle biopsy, was delivered. Factors like board certification, case volume, time since receiving their medical degree and the surgeon's specialty, among others, were all correlated with whether a breast cancer patient got optimal care in this early diagnostic phase.

"And this study just looks at one point of care. When you think about breast cancer and what happens in terms of treatment, there's a continuum," Eberth says. "There's breast-conserving surgery or masectomy, radiation therapy, chemotherapy and hormone therapy. There are a range of treatment points, so physician factors matter in this particular point of care, the diagnosis of breast cancer, and they probably matter in every one.

"We know physicians are a huge influence on whether you get good care or not, and this study really shows that."

Using similar GIS methods, Eberth and colleagues are developing a study particularly focused on the Carolinas. It involves early detection of colon cancer by endoscopy and an assessment of the supply and demand for colorectal screening according to location.

"We're going to see whether there are parts of the state that have not enough supply for the demand, and vice versa," Eberth says. Both situations can cause problems, she says.

The university was able to win over Eberth, a Greenville native and Clemson graduate, through a very positive recruiting process, she says. Her husband, John Eberth, joined the faculty as well, as an assistant professor in the department of cell biology and anatomy at the University of South Carolina School of Medicine.

"When it came time, after my Ph.D. and post-doc, USC was one of the most aggressive in bringing me here," she says.  "This just turned out to be the perfect place for us."