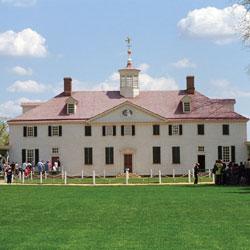 An assistant professor of art history at the University of South Carolina, Brandt is spending the summer at Mount Vernon, Washington's legendary Virginia plantation, while she researches a book about the first U.S. president's home and its unique place in popular American visual culture.

"In the 19th century people would come here like they were coming to a shrine," says Brandt, who is currently lodged on the grounds of Mount Vernon as one of seven inaugural fellows of the Fred W. Smith National Library for the Study of George Washington at Mount Vernon.

"Then, in the twentieth century people began to know Mount Vernon through replicas of it constructed in full-scale," she continues. "Mount Vernon has been used as a model for private houses and funeral homes and car dealerships. You name it, it's been Mount Vernon-ized. I started to question how we got to that point. What does it mean to make Mount Vernon a funeral home? Or a motel?"

Brandt began researching the famous presidential home in 2005 while writing a dissertation focused on six replicas of Mount Vernon built for World's Fairs. This summer's research, however, is focused on one important aspect of its history, specifically the role of the Mount Vernon Ladies Association (MVLA) in its preservation.

Founded by native South Carolinian Ann Pamela Cunningham just prior to the Civil War, the MVLA purchased the home in 1860 to save it from impending ruin. In the years that followed, according to Brandt, the women overcame tremendous odds, including lack of funds and the politics of the day, to become a model for other preservation groups as well as for heritage-based women's organizations such as the Daughters of the American Revolution and the Colonial Dames of America.

"First of all, they were women, they couldn't vote, so in one sense they were inherently apolitical, but most of the women involved were married to men who were very political," Brandt says. "A lot of people were really unsure what the women's true aims were, so they had a really tough time in the press. A lot of what I'm researching concerns how they sell themselves and convince other people that they are a legitimate national organization."

Among other decisions, the MVLA required visiting soldiers during the Civil War to leave their weapons outside the grounds when they visited. In the process they helped shape the popular perception of the home going into the 20th century.

"They're a completely private organization, they've never accepted any donations from the government, and when they formed they really narrowed what Mount Vernon meant," Brandt explains. "They began to define it as a place that is inextricably connected to Washington, obviously, but also as a place that is politically neutral and that is dedicated to America as a unified place."

Brandt's research will continue into the fall thanks to a course release from the College of Arts and Sciences. She hopes to have the book manuscript finished by the end of the year.