Serbia on his mind 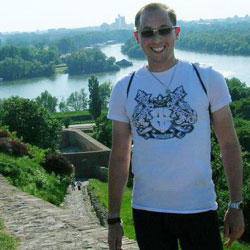 May 2014 graduate Philip Mattox hopes one day to work in Serbia, but first he wants to help raise awareness for the Balkan region's disaster relief following recent floods.

When Philip Mattox walked across Carolina's commencement stage this past May, his dream was to somehow forge a career in Serbia — a country he's grown to embrace after traveling there as a student, meeting its people and studying Balkan history and culture.

A week later, parts of his adopted country were underwater, hit by historic flooding that triggered 2,000 landslides, wrecked 250 bridges and earned the distinction of being Serbia's worst natural disaster. Neighboring Bosnia and Croatia were also affected. Since then, Mattox has been volunteering with international relief efforts.

"I'm doing this because I'm passionate about helping, because I care and because I want to help Serbia," Mattox said.

His intrigue with that part of the world began in the 1990s when images of Balkan refugees and the bloody conflict were a fixture on TV news. After that, he began to meet Serbians seemingly everywhere he traveled. He was a manager at United Parcel Service at the time, working a daily grind of long hours and studying part time for a bachelor's degree. In 2012, he took a severance package from the company to pursue his studies full time, which gave him the opportunity to pick up studies on Balkan history and to travel to Serbia to see friends there.

Since the May floods, Mattox has been volunteering with 28.Jun, a Chicago-based charitable organization organized by Serbian expatriates in the United States and around the globe. The agency has gathered $1.5 million in donated products — mainly diapers, first-aid materials and other hygienic items — and Mattox is working with them to raise funds for the cause to get a delivery jet in the air.

He's also planning an informational event about the disaster and the Balkans Aug. 5 at the S.C. Chamber of Commerce under the auspices of the Columbia World Affairs Council, a community partner of the university's Walker Institute of International and Area Studies.

"Out of the devastation of these floods a lot of good will come," Mattox predicts, citing conversations he has had with relief workers and others who say the disaster is unifying different Balkan ethnic groups for a common cause. "This isn't just about the disaster; I want to make Americans more aware of that area's economic, social and cultural potential and get past some of the ugly memories of the Balkan conflict of the 1990s."

Looking back on his time at Carolina, Mattox is pleased not only to have earned a degree but also to have found a purpose.

"After coming to USC, I realized that I want to do something that I'm passionate about," he said. "I want to do more than just work to pay bills, retire and die five years later. I feel fortunate because I've graduated knowing what I want to do with my life."