Football. Barbecue. It must be fall in the South. 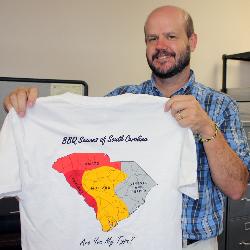 How do you BBQ?

John Kupfer and David Cairns share a love of geography, college football and, most importantly, barbecue. All three collided this fall.

For diehard fans, the South Carolina-Texas A&M matchup means the wait is over for the start of college football season.

John Kupfer and Dave Cairns were friends as doctoral students in geography at the University of Iowa, where they worked under the same adviser and graduated just a few months apart.

Since then, they've conducted research together and kept in touch as their professional careers have led them in different directions. Both are now full professors and have taken over as the chairs of their respective geography departments within the last year: Kupfer at the University of South Carolina and Cairns at Texas A&M.

With the Gamecocks and Aggies kicking off the season against one another this year, Kupfer wanted to make a friendly wager with Cairns – who taught at Carolina in the late 1990s – about the outcome of the game. In deciding what to wager, Kupfer looked to something for which the regional rivalries are nearly as heated as those in college football: barbecue.

"Barbecue is a good item to demonstrate that everything can be related to geography," Kupfer says.

UofSC professor Jerry Mitchell, who coordinates the South Carolina Geographic Alliance, which helps local teachers learn to make geography engaging for their students, explains: "You can't talk about the mustard-based barbecue of the Midlands and not talk about German migration patterns in the U.S."

The definitive word on South Carolina barbecue came from former geography professors Chuck Kovacik and John Winberry, who created the famed barbecue map and introduced Cairns and other Carolina faculty to the Southern staple.

"I think Chuck just liked barbecue, so he started this thing," Kupfer says.

"Chuck had a list of every barbecue restaurant in the state," Cairns says. "I did grow to like the mustard barbecue."

In Texas, Cairns is more likely to get brisket, though the styles there vary as much as in South Carolina.

In South Carolina, barbecue means pork, either Boston butt or whole hog. The fierceness of individual loyalty to a sauce means that picking a favorite can win you instant friends as well as enemies. The meat is slow-cooked for hours until most of the fat has melted into the meat, adding flavor. The meat is then pulled or chopped for eating either on a sandwich with coleslaw or just with white bread and a few Southern sides.

According to the geography department's barbecue map, the flavor most often associated with Columbia and the Midlands is mustard. Along the Savannah River area, they favor a ketchup-based sauce. In the Upstate, around Greenville, it's a light tomato-based sauce. From Interstate 95 to the ocean, the flavor that wins is vinegar and pepper, which can range from mild to almost too hot to eat. Recipes are closely guarded secrets handed down through generations.

So wasn't there something about a friendly wager?

If, heaven forbid, Texas A&M wins, Kupfer will send 10 pounds of Carolina pork barbecue with a variety of mustard, vinegar and pepper, and ketchup-based sauces to College Station, a prospect that already has Cairns' mouth watering.

"I am ready to get some good Carolina barbecue," the former Carolina faculty member said. "I haven't had any in a long time."

Kupfer, however, is confident in the Gamecocks. Though no one can be certain of the game's outcome, he looks forward to celebrating a Carolina victory with 10 pounds of Texas beef brisket and sauce courtesy of his old friend, a new rivalry and what could shape up to be an ongoing tradition.

The South Carolina Geographic Alliance supports local teachers in their efforts to engage students in the study of geography. To learn how you can support such programs, visit Carolina's Promise.