‘It’s not about the grades, it’s about the learning’ 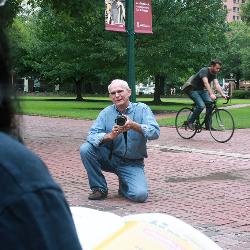 Joe McElveen returns to Carolina for his second time as a freshman. The Columbia physician retired after 30 years as an oncologist and is now studying for a BA in photography.

The last time Joe McElveen was a freshman at the University of South Carolina, Lyndon Johnson was in the White House and the Vietnam War was playing on the nightly news. But after taking two courses this summer as a warm-up, the 64-year-old retired oncologist has a full load scheduled for the fall.

"They wanted to start me out slow," says McElveen, who is now pursuing a bachelor's degree in photography. "I hadn't been in a classroom in a long time."

Since graduating from Carolina the first time with a pharmacy degree in 1973, McElveen worked in hospital pharmacy in Orangeburg, went to the Medical University of South Carolina in Charleston, did his residency at Wake Forest University in Winston-Salem, N.C., and worked at the Medical College of Georgia in Augusta.

"When I was in med school, I took care of a couple of cancer patients and my professor said, 'You need to work with the sick. You're no good with the well.' "

For 30 years in private practice, he was known as Dr. Leland J. McElveen – the "hugging doctor." He describes the role of a medical oncologist as the doctor who holds a cancer patient's hand through the whole treatment process.

"We get them and we take them to the end," he says. "Whatever that outcome may be."

He says he used his positive outlook and sense of humor to help lighten the sadness of his daily work with patients who were running out of time and options.

"All of my patients inspire me," he says. "Even those who don't have a good outcome inspire me."

More recently, he was inspired by an exhibit at the university's McKissick Museum. A few days after checking out the exhibit Photography in the Rural South, which reminded him of photographs he used to take in the 1970s, he returned to campus to talk with admissions counselors about taking classes. They asked him if he just wanted to take a class or if he wanted to be readmitted to the university.

"Not everybody can get back in school," he says. "But I can, so why waste that chance?"

So he applied for re-admission and waited, and waited.

"Finally, I got this big envelope with "YES!" printed on it and it was great," he says. "It was kind of like when I got my letter for medical school."

The classroom experience so far as been different from his days in pharmacy school, when his studies were mostly science and fact-based. Now, his professors talk about the nuances of lighting, what works in a particular photograph and what doesn't. He also says he is a little less worried about his grades this time around, but he does proudly point out that he made an 'A' in his first class.

"It's a different kind of pressure," he says. "I'm in a totally different situation. I'm doing this more for myself. Now, it's not about the grades, it's about learning."

To learn more about options for returning to Carolina as a student, visit Palmetto College.