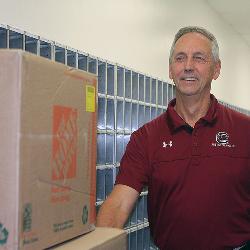 Thousands of packages will pass through the UofSC Postal Service on move-in weekend. Dan Davis will be right in the middle of all that chaos and loving every minute of it.

Dan Davis' favorite weekend is when the students come back to campus. This year, it will be a little more special as Davis recalls his first day on the University of South Carolina campus as a student 50 years ago.

"I was a math major," Davis says. "It didn't matter though because I failed math and history and French and English. I passed swimming with a 'B.'

"So I got a little note from the registrar's office that said, 'You can come back, but you'll be on academic probation.' "

Instead, Davis opted for marriage and the U.S. Navy where he spent four years on active duty and two years on active reserve. Although it was the height of the Vietnam War, Davis spent much of his time on a destroyer in the Middle East.

After he came back to the U.S., Davis was ready for school and came back to Carolina. He earned an associate's degree ('78) in retail management then his bachelor's ('79) in personnel management while he also was working full-time at night with South Carolina Electric & Gas. He also worked on campus in a work-study program.

"I've always had two or three jobs at a time," Davis says.

Davis took advantage of the U.S. Postal Service's policy of favoring veterans for hire and started working there in 1977. He spent most of his time as a rural route carrier in the areas surrounding Columbia.

"I just liked being out in the country, driving around," he says, adding that rural carriers get paid by the day, so the sooner he finished his route, the sooner he could call it a day, or more likely in Davis' case, go to his second or third job, like working at the South Carolina State Fair, which he did for 18 years.

On his weekday off, Davis, who says he originally wanted to be a math teacher, would tutor students at St. Joseph Catholic School in Columbia.

"I sat around for six months, then took a three-week trip with my oldest grandsons," he says. "Then I woke up one morning and thought, 'Now what?' "

Davis has probably worked more in the past decade as a retiree than most people in their prime earning years. He worked with US Airways, but left because they worked him too many hours. He managed a restaurant for a friend, which was probably even more hours, and left when the friend sold it.

For the past seven years, he has worked at the university's postal center, at first delivering mail and now working at the Russell House mail center.

"He works so hard for us and he can do anything," says Barry Meyers, director of the Postal Services at Carolina. "When we get a new staffer, we pair him or her up with Dan and say, 'If you can keep up with this guy, you will be all right.' "

Davis says move-in weekend is his favorite time to work, despite the thousands of packages waiting to be picked up and the thousands of new students who don't know how to work the combinations on the post office boxes or the harried parents worried all the items shipped from home haven't arrived.

"It's fun," he says. "The more chaotic it is, the more fun it is. I like talking to the parents, asking them why they chose USC, telling them about campus."

During basketball season, he officiates high school games – something he started doing 18 years ago to make sure he would have some physical activity "in retirement."

It also is a testament to his lifelong love of basketball that culminated when he tried to be a walk-on for Frank McGuire's basketball team at Carolina. He didn't make it, but he says he still shoots hoops to relax.

For his next job, Davis, who turns 68 this year, would like to be a campus tour guide because he knows where everything is and remembers what things used to be – like when Longstreet Theatre was a gym and the storage area behind it was a swimming pool.

"I've just never been one to sit still," he says.