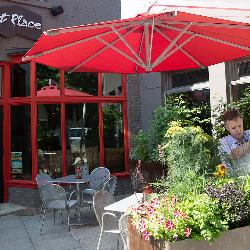 It's early evening, mid-July, 1980-something, rural West Virginia — and hotter outside than an iron skillet on an open flame. A young boy lounges on his grandparents' front porch, a casualty of the intense summer heat. But then his grandmother shouts from the kitchen, her voice loud over the faucet gushing into the stockpot in the sink: "Billy! Go grab some corn!"

She doesn't have to say it twice. The boy charges full steam to the garden, past the tomato cages and the cucumber vines and the honeybees buzzing madly round their hives before high stepping into a cornfield twice his height. Then it's back up to the porch double-speed, breathing hard, running harder, half a dozen freshly snapped ears of the sweetest sweet corn he will ever taste cradled in his arms. The shucking's done before the saltwater simmers on the stove.

"It was just so sweet, right off the plant, a little butter, salt and black pepper," he will later say of that first almost-Proustian chomp into a freshly steamed ear of corn at his grandmother's table. "It's something that I will always remember."

The education of a chef

Now 35 and an accomplished chef with a wall of magazine clippings to prove it, William "Billy" Dissen, HRTM, '06, can do a lot more than shuck corn. In addition to a master's degree in hotel, restaurant and tourism management from Carolina (and a bachelor's degree in English and French from West Virginia University), he graduated with honors from the Culinary Institute of America and has held gigs at topnotch kitchens on both coasts, including the Greenbrier luxury resort in West Virginia, which he describes favorably as "boot camp for chefs," and Charleston's Cypress, one of the marquee dining addresses on the busiest stretch of East Bay Street.

Along the way, Dissen has also shared the kitchen with some of the biggest names in the industry, including Donald Barickman at Cypress and Jamie West at the legendary San Ysidro Ranch in Montecito, California, a resort popular with the Hollywood A-list and NBA superstars. In fact, it was during an externship at San Ysidro that Dissen enjoyed one of the highlights of his career to-date, cooking alongside Julia Child. "She was getting older by then," he says, "but even just being in the room with her and listening to her talk about cooking in an intimate setting was transcendent."

But the chef's life can be a grueling one, marked by long hours and a breakneck pace, especially for Dissen, who frequently travels the country giving cooking demos and preparing one-off tasting dinners. He loved the work — "Just the energy of the kitchen appeals to me, your mind has to be on point at all times," he says. "You're trying to bring all these things happening at your periphery into focus, which is exhilarating" — but even he had limits.

"I got to a point where I was working like crazy and getting a little bit burnt out," says Dissen, who had begun to eye gigs as a corporate chef. "Graduate school seemed like a good career move, so I started doing some research into S.C. universities and USC's International Hospitality Tourism Management master's program popped up as one of the top programs in the country. I thought, 'How great is that? And it's in-state, a couple hours away!'"

He entered Carolina's HRTM program, taught quantity food production as a graduate assistant alongside chef and instructor Jules Pernell and moonlighted as a sous chef, and later head chef, at Momo's Bistro on Devine Street.

"It was a great program. I had a great time learning from talented professors and from my peers, and I received a great degree," he says of his time at Carolina. "I learned a lot about the marketing and management side of hospitality, which has really helped."

In 2009, armed not just with kitchen skills but the business acumen to realize his full potential, Dissen purchased Asheville, N.C.'s Market Place restaurant and began transforming the longstanding white tablecloth establishment into a farm-to-table hotspot. After years of practice in other people's kitchens, he now had a place to fold all of his influences into a singular vision, a casual dining establishment where the Pacific Rim and Hispanic cuisines he'd explored on the West Coast and delicacies discovered during his time in the Palmetto State could share the menu with the Appalachian foods he'd quite literally cut his teeth on.

These days, Dissen routinely wows diners with culinary innovations like seared scallops with butter bean and boiled peanut succotash, togarashi seared tuna with sriracha aioli or a sous-vide dry-rubbed barbecue pork shoulder that spends 14 hours in a hot water bath before being flash grilled over a wood fire of white oak and hickory. And while each elegantly plated dish reflects his training in haute cuisine, the dining room vibe is purposely relaxed.

"The roots of the restaurant were always in fine cuisine and fine dining, and when I took over, that was my base, too, refined food, high-end cuisine," he says. "But that's not really who I am, and that's not the type of restaurant that I wanted to run. I felt like this was a place I could evolve into something that was more me."

Which is what prompts the Appalachian reverie, taking him back to childhood walks in the forest hunting wild ramps and chicken-of-the-wood mushrooms with his grandfather, to his grandmother's modest kitchen, the garden plot, the root cellar: his culinary DNA.

"My grandparents were amazing people but modest, and they lived off the land to help sustain themselves throughout the year," Dissen explains. "They kept honeybees, they foraged, they canned, they pickled, they preserved. I remember going into their cellar, seeing shelf upon shelf of dusty cans and thinking, 'Who eats that?' Nowadays I'm thinking, 'My God, that was gold on the shelf!' — tomatoes pulled out of the garden in the middle of July at peak ripeness, sweet and juicy. In the middle of winter, you open it and you've got summer all over again."

Like a growing number of forward-thinking chefs, Dissen himself forages, cans, pickles and preserves. He also stocks his pantry with an array of products from local farmers and is careful to serve only sustainably caught seafood. His restaurant, meanwhile, is a physical manifestation of the same keen environmental consciousness, featuring floors made from recycled bamboo, a bar constructed with recycled concrete and sand from the nearby French Broad River, and water heated by eight rooftop solar panels.

The efforts have not gone unnoticed. He's been a featured chef at New York City's James Beard House, regularly visits Capitol Hill to advocate for sustainable agriculture and earlier this year was named to the Blue Ribbon Task Force of the Monterrey Bay Aquarium Seafood Watch, joining 19 other eco-minded chefs from around the country to promote sustainable seafood practices.

"I've had people tell me, 'You're a really sustainable chef,' but to me it just seems like, if you're a chef, you ought to be doing certain things anyway — using whole animals, great local produce, knowing who's growing your products and where they come from," Dissen says. "With the industrialization of our country we've lost sight of some of that. With The Market Place we're working to bring things full circle.

"I suppose we do call ourselves a farm-to-table restaurant, but it's not something we necessarily tout. It's just what you should be doing."

A version of this story appears in the fall 2014 issue of Carolinian, the University of South Carolina alumni magazine. To subscribe, visit the My Carolina Alumni Association.