Returning to the quad 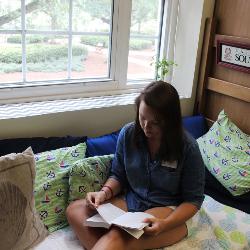 Restoring the past, building the future

Junior Laura Bankert is excited about returning to her freshman residence hall in the newly renovated Women's Quad as a resident mentor.

Laura Bankert knows what it means to be connected to campus. It's something she felt early as a freshman living on the second floor of Sims in the Women's Quad.

This year, Bankert, a junior elementary education major and first-time resident mentor, hopes she can make a new group of Gamecocks feel the same way as she moves back to campus in the newly renovated Women's Quad.

"Our team is close already and it seems like we've known each other for a long time," she says of the 21 mentors for the quad. "Hopefully, because of us being a good team and with the buildings connecting, all of our residents feel like they are one community."

Bankert moved off-campus to live in an apartment during her sophomore year. It was a decision that drove her to apply to become a resident mentor this year.

"I tell sophomores that this time last year, I was so excited to live off campus," she says. "You feel so disconnected and it's so easy to not go to class and stay at home. You have the rest of life to live off campus."

Living off campus meant she didn't know her neighbors and struggled to deal with roommate conflicts on her own. When she left campus after class, she didn't come back for other events.

But back on campus in the new-old quad, Bankert says she's excited to take advantage of everything her new home has to offer, like the gourmet kitchens in each building.

"Our common areas are awesome, too. We're going to create study groups in the building and it's going to be really conducive to being able to hang out with your friends and study outside of the library," she says.

Coming back to her old stomping grounds has been strange and exciting, she says. She was one of the last students to live in the quad before the renovations. The building she lived in as a freshman was outdated. That's not the case anymore.

"I was excited when I first moved in. I remember thinking that Sims was as good as it could get," she says. "Now, it's incredible. How is this the same building? Have you seen the kitchen? I feel like we should start a cooking show."

She's just as excited to take on the new role as a resident mentor in a place that meant so much to her. The Women's Quad was her top choice when she applied for the position.

"There's a sense of belonging here. You feel like you're a part of something," she says. "The relationships I made living here and the location and the fact that it is brand new were a part of my decision. Living here was the biggest reason I chose to come back. I'm not sure if I'd been somewhere else that I would be as excited."

Find out more about the renovations to the Women's Quad and see the new interiors in our video.