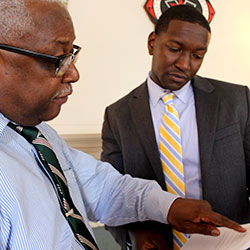 Christopher Gallman joined his dad at UofSC's law enforcement division as a student.

The University of South Carolina community prides itself on being a family. For Christopher Gallman, it really is.

Gallman, a 2008 graduate from the Darla Moore School of Business, is following in his dad’s footsteps by working at the university’s law enforcement division, something he first stumbled on as a student. Now an investigator with USCPD, Gallman works alongside his father, Calvin Gallman, every day.

“It’s not every day people get to talk to their dads, but I get to talk to my dad every day,” he says. “He’s right around the corner if I ever need anything advice wise.”

Calvin Gallman, who has been working for USCPD for more than 25 years, is a recognizable face around campus.

“I’m always running in to people who know him. It’s fun to work around that. It’s fun to follow in his footsteps and do things to make him proud,” Christopher Gallman says.

Law enforcement runs in the family. His mother has worked at the State Law Enforcement Division for more than 20 years. As a senior, Christopher Gallman joined USCPD’s team of student workers and has been working there since, even while he was an intern with a financial advising company after graduating.

But Gallman returned full time to campus to find steady work to support his family and found a career he loves.

“I was never opposed to being a police officer. I went to school for econ and finance so I wanted to try that out,” he says. “But for right now, it’s something I tried and was pretty good at so I stuck with it. I love it.”

He says he’s still putting his economics degree to work in investigations, though. Having an economics background has helped out a lot, he says.

“It’s all analytical stuff and that’s what economics teaches you. It teaches you to be an analytical thinker and to take little pieces to come up with a solution,” Gallman says. ”That’s what investigations is. You get little pieces of evidence, clues here and there, and you put it together to make the big picture.”

The job is challenging, offering something new every day and always teaching Gallman something new. But he says he especially loves working for the university, a place he remembers as a kid and where he knows everyone.

“Here? Everywhere I go, I know somebody. It’s that family feeling,” he says. “I get to work with people I’ve pretty much known my whole life. It’s probably cliché to say that USC is a family, but it really is.”