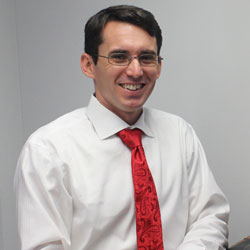 Seth Stoughton was a Tallahassee, Fla., police officer for five years and a state investigator for three years before attending law school.

Hometown: I grew up in south Florida.

What's your area of study or research? Broadly, criminal law and procedure. More precisely, the regulation of policing, police practices and vice crimes.

Why did you choose Carolina? My wife is from Atlanta and I'm from Florida, so coming back to the Southeast was a no-brainer. When I had the chance to interview with and then visit USC Law, everyone we spoke to — from faculty to staff to students — was warm and friendly and had great things to say about the sense of community at USC Law. Columbia is also the perfect size city for our family, and the strong ties between USC Law and the local legal community give me the chance to make sure that my scholarship has a practical dimension to it, which is important to me. Plus, I missed sweet tea and was tired of the Boston winters!

What are you most looking forward to this year? Settling down! My incredibly patient wife and unbelievably adaptable children and I have done eight interstate moves since 2008, so we're very much looking forward to putting down some long-term roots.

What made you decide to go into academia? I have always been interested in teaching, but I took a nontraditional path to the legal profession. I went to college initially thinking that I would be a high school English teacher, then got distracted when a friend of mine who worked at the city police department suggested that I work there part-time for a year or so as I finished my degree. That "part-time for a year" turned into a five-year stint as a full-time police officer, followed by three years as a state investigator. I retained my interest in teaching, from training officers in report writing and new technologies to offering community self-defense classes, but I also became fascinated with the way that people and law interact. I finished my degree (it only took 10 years!) and then the family packed up and moved to Virginia so I could go to law school. As a law student, I had some truly phenomenal professors who both inspired and encouraged me to combine my passion for teaching with my interest in studying policing and criminal law.

What's a talent you have or something that you've done that people might find surprising? I have a fourth degree black belt in Kenpo Karate and a (not very) guilty passion for fantasy books and role-playing games.

What was the topic of your dissertation? Legal scholars don't have dissertations, but I did have two articles published this past summer. The first, The Incidental Regulation of Policing, was published in the Minnesota Law Review. It explores the ways that police practices are shaped by laws that, on their face, have nothing to do with policing. When we talk about police reform and the need for regulation, we tend to focus on the Fourth Amendment or other laws that are exclusively or primarily concerned with policing, but that is only part of what needs to be a broader conversation. Labor law, local government law and anti-discrimination law, just to name a few, each have a significant impact on police behavior, which means that we need to understand them as underlying causes when we want to change that behavior. The second, Policing Facts, came out in the Tulane Law Review. It identifies some of the factual misconceptions that the Supreme Court has labored under with respect to policing. This is important because when the court creates rules of criminal procedure based on erroneous assumptions about the way the world works, the rules are unlikely to have the effect that the court thought they would.