Professors 'retire' but keep on working 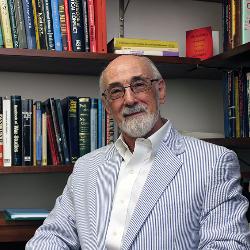 Retired political science professor Harvey Starr has volunteered to help get the ball rolling on what he hopes could become a center for retired and retiring professors.

Harvey Starr is currently working on three or four different book projects — “depending on how you want to count it,” he says. “A colleague and I are waiting to hear back about one proposal.” He’s also overseeing three active dissertations, having just hooded another new Ph.D. this summer. The catch? He officially retired June 30.

The longtime political science professor and former department chair, now 67 years old, has immersed himself in scholarship and teaching since coming to the University of South Carolina in 1989, but now that he’s crossing the so-called finish line, he finds he’s not quite finished.

In terms of scholarly commitment, Starr is not that different from many other faculty at the same stage in their careers. However, a fifth new project does distinguish him just a bit: Earlier this year, he volunteered to help get the ball rolling on what he hopes could one day become a sort of center for retired and retiring professors.

He got the idea while working on one of those book projects, an intellectual biography of his mentor, Yale research professor of political science Bruce Russett, who himself retired just a few years ago but who remains active at his own institution.

“Bruce mentioned a talk he had given at a place called the Henry Koerner Center for Emeritus Faculty at Yale,” says Starr. “They have monthly meetings at which people talk about their intellectual journeys across their whole career. I thought, ‘What an interesting idea.’ I realize we don’t have the resources to do what they’ve done necessarily, but I wonder what we could do.”

Starr mentioned the idea to Provost Michael Amiridis who put him in touch with faculty senate chair James Knapp. Turns out, Knapp has been pondering similar issues and plans to explore the idea further during the remainder of his senate term.

“The senior faculty, and more specifically the emeritus faculty, are a tremendous potential resource for the university that in many ways is just being wasted,” Knapp says. “There are any number of faculty that would like to maintain some level of involvement with the university. And there are any number of things that could be done at little or no cost but that would derive significant benefit to both.”

When Arlene Bowers Andrews retired from the College of Social Work in 2013, she didn’t exactly pack it in. Andrews does consulting work in the community and maintains an office on campus and continues to produce new research.

Andrews also remains involved at Carolina by mentoring junior faculty as they go through the tenure process and hopes to stay involved for the foreseeable future. She supports an effort to create an organization for emeritus faculty.

“One of the things I do miss is that, at USC in particular, we have a lot of interdisciplinary collaborations,” Andrews says. “You meet people from different disciplines who are like-minded and some that are very different from you. It’s always intellectually stimulating. I can certainly see the advantage of a center that would bring people together across disciplines to share common interests. Many of us are still writing, still doing research. We may retire from our jobs at the university but we don’t retire from our careers. There are still things to share.”

For his part, Starr is serving as a self-described “free contractor” as he researches what other institutions have done, what Carolina faculty want and what is possible.

“I’ve discovered a variety of issues that you need to consider as you retire, beyond what Human Resources and the S.C. retirement system take care of. Some are at the department level, some are at the college level,” says Starr. “I could write those up right now and give it to the provost, but I want to do much more than that.”

Wanting to do much more is what seems to drive most retired faculty to stay in the game.

“So much of my identity is being a doctor,” says Charles Bryan, a charter member of the university’s School of Medicine, who retired in 2008 after 31 years. “I’ve been accused of investing too much in my career, but what really gives me pleasure is to see patients and help them get better.

Since retiring Bryan has devoted countless hours to researching medical history, often with the assistance of Carolina undergraduates. His latest book, “Asylum Doctor: James Woods Babcock and the Red Plague of Pellagra” (USC Press), was 15 years in the making.

“I’m not sure what project I’ll take on next, but I have several ideas and several papers on the back burner,” he says. “There’s really no motivation to do that anymore except for the personal satisfaction.”