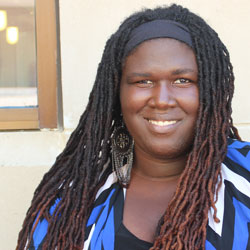 Sharina Haynes wants to illuminate the contributions of African-American physicists from the past century — and ignite the interest of minority students in the physical sciences.

After she earned bachelor's and master's degrees in physics and completed an internship at NASA's Jet Propulsion Lab, it seemed a sure bet that Sharina Haynes was headed for a doctoral degree in the same academic discipline.

Haynes is hoping to earn a Ph.D., but she has experienced a strong gravitational pull in a different direction.

"I became very interested in why students either like physics or don't, and that led me to looking for a graduate-level history of science programs," says Haynes, a Charleston native.

Haynes' search led her to the University of South Carolina's history department where she has found a good fit for her interests. She recently worked with the American Institute of Physics on an initiative to attract more minority students into the physics pipeline. To that end, Haynes helped develop a high school teacher's guide that highlights the accomplishments of African-American physicists.

"My passion is to show what African-Americans have accomplished in the physical sciences," she says. "From 1918 to the present, there have been about 300 African-Americans to earn Ph.D.s in physics, and I'd like to create a narrative so students can know who they were and what they contributed to the field."

Among those African American physicists was Elmer Imes, a Tennessee native who was the second to earn a doctoral degree in the field and whose work provided an early verification of quantum theory.

Beyond her historical interests in science, Haynes wants to get involved in outreach efforts to mentor students who might be candidates for majoring in the physical sciences.

"I would love to do some physics tutoring in area schools, and perhaps go to the new planetarium with high school students to help cultivate their interest," Haynes says. "Not everyone is going to be a physics major, but they need to be scientifically literate. And I want them to know more about the contributions people have made to the field — not the Einsteins and the Oppenheimers, but the ones they've never heard of."